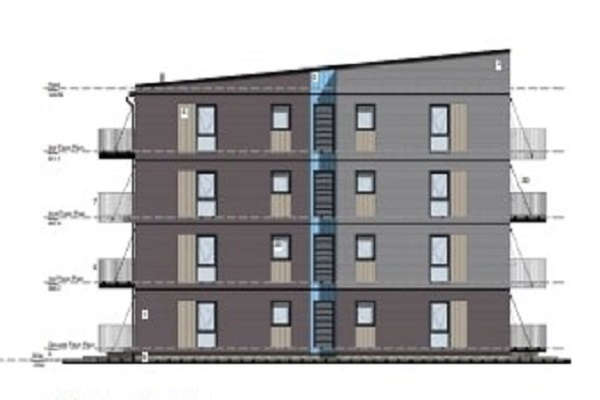 Boklok, which is owned by IKEA and Skanska, is set to build a mixture of flats and houses at a former school site at Fitzalan Road. The development will be known as Boklok by the Park and will be close to Littlehampton Academy. The site used to be home to the Littlehampton Community School, which has since been demolished.

Planning permission for 68 dwellings at the site was refused in 2016 but was later allowed on appeal.

Phase one of Boklok’s Worthing scheme, known as Boklok on the Lake, saw all homes fully reserved in January and the company says 91 per cent of buyers were local, first-time buyers.
The Littlehampton scheme is set to have a block of 32 flats and 80 houses arranged around two main areas of public open space. Of the flats, 23 will be one-beds and nine will be two-beds. There will be 26 two-bed houses and 54 three-bed houses.

A total of 34 homes will be ‘affordable’ but Arun District Council’s housing strategy and enabling manager objected on the basis that the affordable homes are ‘clustered’ together.

They added that there are a disproportionate number of three-beds and that they would like to see more two-beds. But planning officers said this would be ‘difficult to accommodate’ due to the modular design.

Planning officers added: “The scale of shortfall in meeting housing need is substantial and the consequential deprivation of opportunity to secure a suitable, decent home is significantly harmful.”

A total of 178 car parking spaces, including visitor parking and a car club, are proposed and Boklok is in discussions with Pod Point to provide EV spaces.

All homes will have access to sheltered cycle parking.

The ‘modular’ homes are built off site using ‘Modern Methods of Construction’. This, Boklok says, allows for efficient housebuilding.
Littlehampton Town Council said the reasons behind its original objection to the scheme had been addressed and it ‘welcomed further engagement by Boklok’.

The scheme has received 20 letters of support, which is unusual for a planning application in this area.

Supporters commended the use of a brownfield site, adding that affordable housing is ‘much-needed ‘ in Littlehampton. One said the development is ‘just what Littlehampton needs’.

There were also seven objections to the development which cited concerns about extra traffic and the impact on local infrastructure.

Others called for assurances that the houses would be sold to local people.

Council planning officers said the homes would be marketed using the ‘Left-To-Live’ model which considers the average salary of a full-time worker, their living expenses, and their ability to borrow.

“This would allow for more affordable market homes that would enable people easier access to owning their own home,” they said.

It is also being asked for over £4,000 towards public art in Littlehampton and £193,000 for a play area. Highways authority West Sussex County Council has also requested just over £21,000 towards A27 junction mitigation in Arun.

More details about the development can be found at the council’s planning portal using reference: LU/116/21/PL.