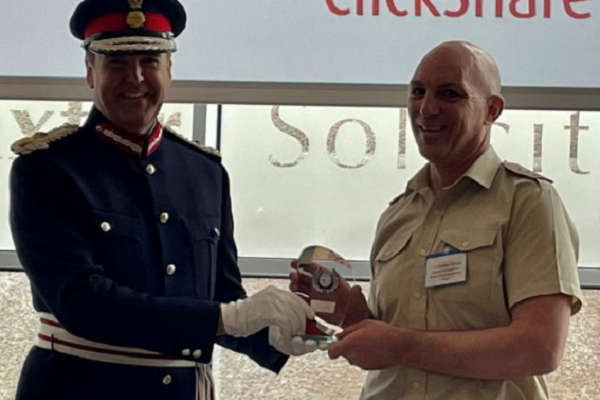 Lt Col Caesar said: “At this time of global unrest, where our regular reservist service personnel, may at short notice be called into action, it is important we demonstrate support for them and their families.

Loaded with 20 kg of body armour, he set off from the Chattri memorial in Brighton, visiting several war memorials, including Patcham and Boer, before finishing at the Brighton Old Stein War Memorial.

UHSussex has dozens of staff who have served or continue to serve in the Armed Forces, working in a wide variety of roles including as doctors, nurses, surgeons, therapists, pathologists, executive directors and in IT.

Last month, Lt Ben Caesar received a Service Champion Award (pictured receiving award from Lord Lieutenant East Sussex) in recognition for setting up Brighton’s Chavasse Clinic and his selfless commitment to improving the lives of many.

The Trust’s Chavasse Clinic, which was founded in 2016, is one of only two specialist musculoskeletal clinics in the UK for service personnel and veterans.

Since starting the clinic, the Trust became one of the first in the country to achieve Veteran Aware accreditation, recognising its commitment to improving NHS care for veterans, reservists, members of the Armed Forces and their families.

Lt Col Caesar said: “When patients come to see me in these clinics, they want to see someone who understands what they’ve been through and the difficulties that they face.

“My work with the veteran community is incredibly rewarding on a personal level, as I feel it is an opportunity to show those who have sacrificed physically, psychologically or both, that the current serving members of the Armed Forces remember and care about their wellbeing.”

Dr George Findlay is the Chief Executive at UHSussex and former squadron leader in the Royal Air Force. He said: “We have incredible front-line Armed Forces personnel within our hospitals and also care for many veterans and their families. We are proud of our commitment to being veteran aware across all our hospitals and communities we serve.”

As part its veteran aware commitment, the Trust is now developing plans for its first Commemorative Garden at Southlands Hospital for Veteran patients and their families.

The garden, which is due to be completed by the end of 2023, will be a reflection and wellness space, and also used to host events for the veteran community throughout the year.