Bognor Town Football Club knocked out of the FA Cup 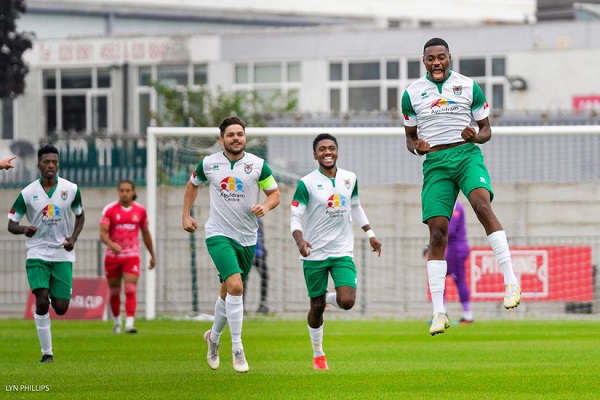 Jack Pearce insists he will take the positives from Bognor's exit from the FA Cup after a 4-3 defeat at Hayes & Yeading in this first qualifying round match on Saturday.

The Rocks manager saw the visitors score three goals away from home yet still lose the tie and although he is pleased with his side's attacking prowess, he knows only too well there is much room for improvement when it comes to defending.

Last time out at Hayes & Yeading for the Rocks finished with a 5-0 loss after a poor second half performance and payback was the goal for the Sussex side.

Bognor took the lead in the first minute and it was just the start of what would be a rollercoaster ride for the Nye Camp ace that ultimately ended in a derailment.

Rocks were buoyed by the return of Craig Robson back in defence following his suspension and Harvey Whyte retained his captaincy.

They netted their first goal after just 52 seconds when Mongoy ran across the defence before letting fly with a wonderful strike high into the net.

But the home side rallied and within 20 minutes were 2-1 up after Whyte gave away a penalty and some slack rear guard manoeuvres led to another goal. Ashton Leigh levelled the scores at 2-2 just before the break.

Despite some flowing football and good possession Pearce's men succumbed to two more goals before Gavin McCallum made it 4-3 at the death.

Pearce and coach Robbie Blake now face the challenge of rallying the troops for Saturday's home game against Carshalton Athletic in the Isthmian premier division. And Pearce said: "It's ever so difficult to concede four goals in a game and expect to win it and sadly for us that was the case. We defended poorly and ultimately that has cost us.

"That said, we have scored three goals away from home so we are not far off being where we want to be. Poor decision making when defending can be catastrophic and we must cut out these errors if we are to have a season that will repay our supporters for the tremendous backing that they continue to give us.

"We will go again against Carshalton and try to play our football but at the same time try to tighten things top at the back."