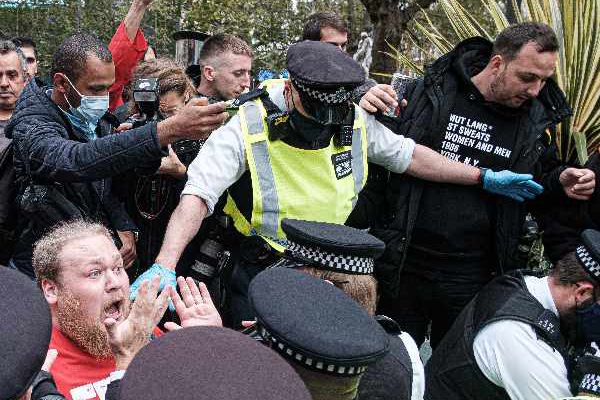 A woman from Brighton, Louise Creffield, 34 has been charged in connection with gatherings in Trafalgar Square in August and September and events in Westminster in October and November.

The older brother of former Labour leader Jeremy Corbyn has attended a number of rallies across London during the pandemic.

The rules state anyone caught organising an illegal gathering of more than 30 people could be fined up to £10,000.

The Metropolitan Police has revealed Mr Corbyn is charged with 10 offences for alleged breaches of coronavirus rules dating between last August and New Year’s Eve.

Each gathering had more than 30 anti-lockdown protesters, according to Scotland Yard.

Mr Corbyn, who has previously declared coronavirus a “hoax”, has appeared in court a number of times over similar offences.

He is among five people who face a total of 36 criminal charges for alleged breaches of coronavirus rules.

Kay Allison Shemirani, 55, from Uckfield in East Sussex, faces numerous charges in relation to gatherings in Trafalgar Square last August and September, and another in Whitehall, last September.

Fiona Hine, 35, from Richmond, London, was charged with offences to do with gatherings in Trafalgar Square and Whitehall.

Vincent Dunmall, 54 from Orpington in South East London has been charged with eight offences to do with protests in London in late 2020.

They are all due to appear at Westminster Magistrates’ Court on Thursday May 20.