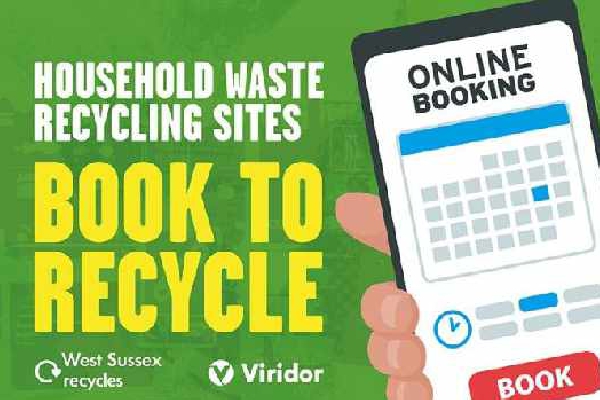 The success of a trial booking scheme at several West Sussex Recycling Centres will be reviewed by the Communities, Highways and Environment Scrutiny Committee next week.

The committee will examine proposals to run a public consultation on whether to make the trial permanent when it meets on Thursday 30 September at 11am at County Hall, Chichester.

The Book To Recycle scheme was introduced in the spring at Bognor Regis, Crawley, Horsham, Littlehampton, Shoreham-By-Sea and Worthing Recycling Centres, and means anyone wanting to visit needs to pre-book a slot in advance.

The trial scheme was introduced due to high demand for certain Recycling Centres in the spring, which led to Sussex Police closing some sites temporarily. Prior to the introduction of the Book To Recycle scheme, it was not uncommon during peak periods to have vehicles waiting to enter sites for 45-90 minutes.

This scheme allows the demand at the sites to be spread out safely over the course of the week rather than large queues forming at peak times causing pollution and increased emissions from queuing vehicles and disruption to neighbouring residents and local businesses.

The committee will hear the results of a survey carried out with people visiting Recycling Centres, which found that 4 out of every 5 booking site users (79%) thought the system should be made permanent. Almost everyone who was surveyed (99%) said queuing times had improved since its introduction.

The committee will also examine proposals to add the Burgess Hill Recycling Centre to the Book To Recycle trial scheme. The site often experiences issues with queuing traffic through a mix of customer, refuse collection, and HGV vehicles. At times traffic management is required to allow HGVs to pass cars. Pressures on local access roads are anticipated to get worse, so council officers are proposing to also include this site in the Book to Recycle scheme.

Following the scrutiny meeting, should the Cabinet Member for Environment and Climate Change decide to go ahead with the proposals, a consultation on whether to make the trial scheme permanent could take place later this year.

Also on the agenda at the scrutiny meeting is an update on the development of a Local Flood Risk Management Strategy and a review of the performance of the council’s Highways Maintenance Contracts.

The meeting can be followed online.