Council leader blasts Southern Water for ‘terrible performance across the board’ 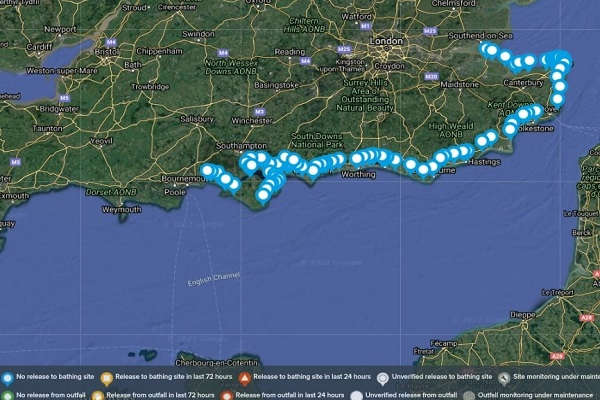 Arun District Council’s leader did not hold back when Southern Water outlined its newest investment plans.

Shaun Gunner (Con, Rustington East) blasted the company for its ‘terrible performance across the board’ in 2021. These were not his words, but those of the Environment Agency (EA).

In July, the regulator released a damning report outlining the performance of England’s nine water companies. Southern Water’s performance was rated one out of a possible four stars – joint worst with South West Water. In the last decade, Southern Water’s performance fluctuated between one and three stars but has declined since 2018.Performance on serious pollution incidents has been ‘significantly below target’ during seven of the last eleven years and ‘close to or slightly below’ target during four.

EA chair Emma Howard Boyd said: “In 2021, the environmental performance of England’s nine water and sewerage companies was the worst we have seen for years.

“Measured against our four-star rating, most of them went the wrong way: down.Four companies (Anglian, Thames, Wessex, Yorkshire Water) were rated only two stars, which means they require significant improvement. Two (Southern and South West Water) fell to one star, the bottom of our star ratings, meaning their performance was terrible across the board.”

Mr Murphy spoke about how the company wanted to work with partners, such as the district council, to reduce the amount of rainwater entering its system.

This would help towards reducing releases of untreated sewage into the sea and waterways – known as combined storm overflows (CSOs).

These can be done legally but last year the company was fined £90 million for more than 6,900 illegal discharges.

“We have a number of incidents each year reported by our customers about internal sewer flooding, and these could be backing up into a customer’s bathtub or shower tray or, in the worst case, it could be flooding of their basement or ground floor in their property,” Mr Murphy said.

He explained that the biggest cause was blockages due to ‘unflushable’ items, such as wet wipes, nappies, cotton buds, fats, and oils, being disposed of incorrectly.

The second biggest cause, ‘hydraulic overload’, is too much rainwater entering the system.

“The sewer system is designed with storm overflows, that discharge excess water to prevent flooding from homes,” Mr Murphy explained. “But those storm discharges are of concern to our customers because, whilst it’s diluted, it’s untreated sewage that is discharged into the environment.

“Getting rainwater out of the system will allow more capacity for the waste water to stay in the system. But the way to do this is not to dig up the roads with heavy engineering, or concrete and steel, which are carbon intensive, but to work with nature.”

In light of the EA’s findings, Mr Gunner asked: ‘How can anyone have any confidence that anything in the DWMP will actually happen?’.

“Southern Water is a company with performance that, on Friday, was declared by the Environment Agency as ‘terrible across the board’,” he said.
“There’s been a three-fold increase in serious pollution incidents in the last year and Southern Water was the only company with ‘significant issues’ in its water resource management plan.”

On one of the hottest days of the year, the company released sewage from the Littlehampton Pumping Station. Southern Water notified the council and Environment Agency about the release on July 8 which it says had ‘no impact on bathing water quality’.

But Mr Gunner said he had not received any reply from the company about recent releases. "In the Arun district there are residents here that pay Southern Water to take away their waste and then they can go out in Littlehampton and swim in it,” he said.

“We’ve had two incidents recently, the second one incidentally I wrote to Southern Water about and haven’t yet even had an acknowledgement, which I think is pretty rude to the leader of the council".

Mr Murphy apologised to the council leader for the lack of a response and said: “It’s all about making the systems as resilient as possible and that’s a real focus for us.”

The committee did welcome attempts by Southern Water to reduce water use and blockages using education campaigns and ‘green solutions’.
Isabel Thurston (Green, Barnham), who advocated for the use of rain gardens, said: “I just wanted to say that I think this is an excellent plan.

“I personally would love us to be supporting the nature based solutions very strongly.”

But the committee was also not fully convinced by Southern Water’s plans to address pressing issues.
Hugh Coster (Ind, Aldwick East) said: “No matter how much we educate people into doing this that and the other about not using so much water, it’s going to make hardly any difference to the flooding issue which of course is when we get large amounts of rain water.

There were also concerns about ‘nutrient neutrality’ from the council’s director of growth, Karl Roberts. This has seen housebuilding brought to a halt in surrounding districts due to levels of pollution found in waterways. Restrictions have not yet been placed on Arun but Mr Roberts asked if Southern Water would be making investments in areas which could be affected in the future.

Mr Murphy said ‘no’, because the amount the company can charge customers is regulated which, he says, limits investment.

The committee agreed to endorse a 12 page response to the DWMP on behalf of the council.