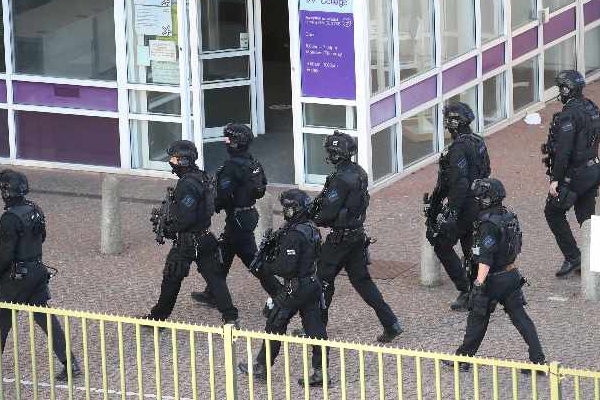 Students and staff are being told to stay at home today as the investigation continues after reports of gunshots near a West Sussex college.

An 18-year-old man has been detained following the incident at Crawley College and a firearm and a knife were seized.

A video shared on Snapchat seen by the PA news agency appears to show someone being held on the ground by several others outside the college, while the person holding the camera says “my man had a knife and a gun”.

Local officers were liaising with counter-terror specialists, but police later announced that it is not being treated as a terrorist incident.

Later, bomb disposal units were seen arriving at the college.

Significant numbers of armed police remained at the scene in the West Sussex town as the area continues to be cordoned off.

Earlier, a group of people were seen being escorted out of a building.

A large police presence – including units from the Metropolitan Police – is in place near the college and the public has been urged to stay away.

James, a Crawley College student who did not wish to share his second name, praised his teacher for keeping his class calm following the gunshots.

“I was doing my work at the time then suddenly heard some gunshots from the very bottom of the tower,” the 19-year-old, who was on the sixth floor of the building, told V2 Radio.

James said police arrived just a few minutes later and although the experience was scary he “felt calm and safe” thanks to his teacher and the fast response from police – who later helped to evacuate his class.

“It’s a really new experience and felt really scary due to there being a gun around where I’m doing my college work,” he said.

“The teacher, he barricaded the room’s door just in case and I have a lot of trust in him, since we were far up the tower I felt safer too.

“(I’m) just thankful that we had brave teachers and police around.”

Chief Superintendent Howard Hodges said: “We continue to have a large policing presence in Crawley and are appealing for anyone with information to come forward.

“Two staff members at the college suffered minor injuries and presented themselves to a walk-in medical centre.

“No-one else has presented themselves to us with injuries but if you need medical assistance please contact the ambulance service or speak to an officer.

“We are liaising with officers at Counter Terrorism Policing South East (CTPSE). All lines of inquiry are open at this stage.”

Officers received multiple calls shortly after 3.10pm of reports of gunshot fire at the college.

Armed police were dispatched to the scene and an 18-year-old man from Crawley was detained in College Road at 3.20pm, police said.

He remains in custody at this time.

The college tweeted that it was awaiting further information from police but was not aware of any serious injuries.

“Our priority remains the safety of students & staff,” it said.

Anyone with information can contact police by calling 101 or online quoting Operation Reset.