Crawley’s Labour group has secured a majority at the borough council but lost its leader. 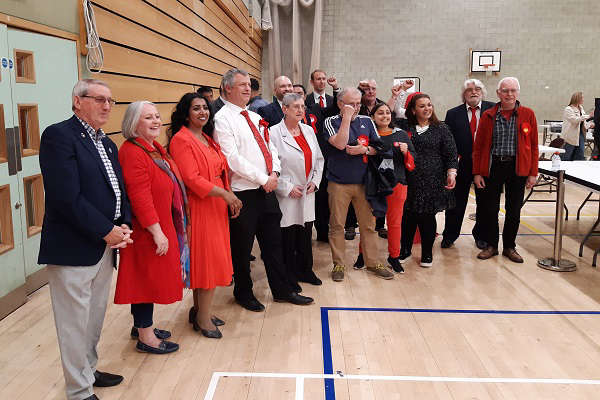 Twelve seats were being contested when the town turned out to vote on Thursday (May 5) – five held by Labour, six by the Conservatives and one Independent.

When the count was complete on Friday afternoon (May 6), Labour had taken seven of those seats – including the long-time Tory Three Bridges – and the Conservatives had won five.

The results left Labour with a total of 18 seats and the Tories with 17.

A by-election will be held next month for the final Southgate seat, which has been a safe Labour hold for years. While the reds were celebrating their regained grip on the town, they were left with the task of selecting a new leader of the group and the council after Peter Lamb announced his decision to step down from the role.

Mr Lamb said: “I was 25 when I became Labour group leader. I’ve done the second longest term ever. I’m the first Labour group leader for years to be able to go on his own terms. I feel like I’ve done for now what I want to do and I want a short break from the intense politics that I have been doing. But I’m Crawley through and through and I’ll be here doing what I can [for] the community whatever happens.”

One possible candidate for the leadership is Michael Jones, who has been a member of the council since 2010.

He said he would be speaking with other councillors and deciding over the weekend whether he would like to stand for the role.

As for the results of the elections, he said he was ‘absolutely delighted’ with the way things had gone.

He added: “I think it shows that people in Crawley recognise the work that the Labour leadership has done over the past few years.

Even before voting started, residents knew there would be some new faces on the council after six councillors chose to step down.

Speaking after the results were announced, Bob Lanzer – who comfortably held on to his Pound Hill South & Worth for the Tories – said his party had put in a ‘strong performance’.

He said: “We pledge to be a constructive, effective opposition in Crawley – and I think our track record on that is evidenced by the strength of our vote today on what is really a low turnout.”