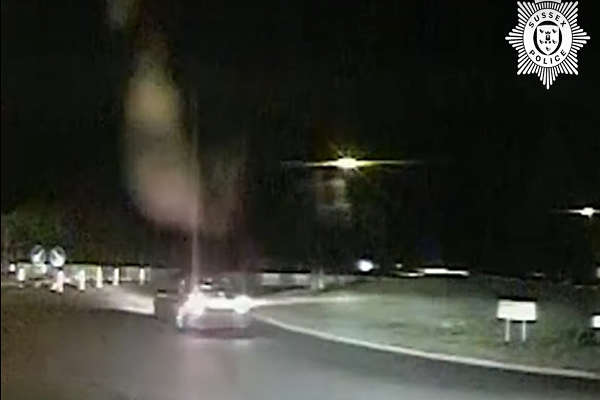 Police have issued a warning to antisocial drivers after a number of motorists were caught ‘drifting’ around a roundabout.

Sussex Police have told V2 Radio that the footage was captured by an officer in an unmarked police vehicle on the A24 near Horsham in the early hours of Sunday 4 July.

Using powers under section 59 of the Police Reform Act, one vehicle was seized as the driver had already been issued with a previous warning, and four other drivers were issued with warnings.

All were travelling in convoy and were seen to be driving antisocially.

PC Steve Lambeth, from the Roads Policing Unit, said: “The warnings issued to the drivers apply to them as well as their vehicles, so if they get caught driving antisocially again within the next 12 months then the car they are driving will get seized and they could face a court prosecution.

“Likewise, if they allow someone else to drive their car antisocially in the next 12 months then their car can still be seized, even if they’re not the one driving it at the time.

“Careless, inconsiderate and antisocial driving will not be tolerated in Sussex. At the very least, it causes a nuisance to local residents and road users, but it can also be dangerous and put lives at risk.

“We will do our best to carry out enforcement action where necessary, using both marked and unmarked vehicles. We cannot be everywhere, but we can be anywhere, so think carefully before drifting round a roundabout.”