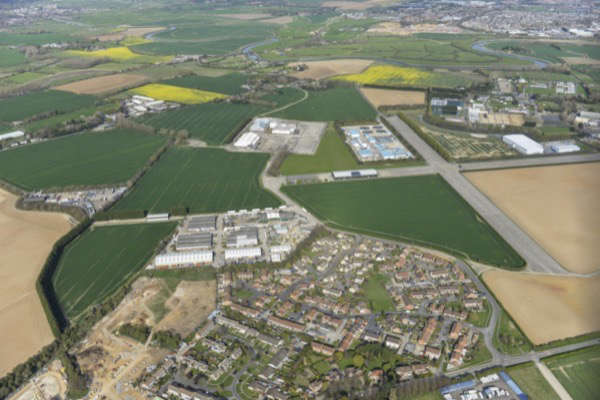 A planning application for 1,500 homes at Ford Airfield is set to be given ‘outline’ approval – or permission in principle – more than two years after it was first submitted.

Arun District Council’s Planning Committee agreed for the head of planning to approve the outline application from Redrow Homes Southern Counties and Wates Developments Ltd on Wednesday (April 27).
The proposals also include a 60-bed care home, employment and retail floorspace, land for a school, and public space.
According to a planning report, ‘much of the land is in agricultural use’ with some concrete runways from the airfield still in place.
The Planning Committee first discussed the proposals in November but decided to defer a decision.
This was so further information could be provided on odours from a nearby waste water treatment plant, as well as further information on a new school linked to the development.

The developers have agreed to make financial contributions towards a new school which local education authority West Sussex County Council believes is essential to meet future demand. The site is close to the Ford waste water treatment works and a waste management facility operated by Grundon.

Odour assessments found ‘earthy’ smells coming from the treatment works but concluded that they would ‘not significantly impact’ on new homes.
Consultants hired by the council concluded that ‘unacceptable odours’ could affect homes within 300 metres of the aerated sludge plant.
As a result, a 300 metre cordon will prohibit development in this area as a ‘precaution’, which is a condition of the outline planning approval.
During the committee meeting, councillor Hugh Coster (Independent, Aldwick East) expressed concerns that future residents could be impacted by odours and he called for more testing.“I can tell you all sorts of variations of pong exist in and around that area there, further than the 300 metres that is mentioned,” he said. But planning officers said testing carried out at the site had been ‘in line with best practice’.
Mr Coster said he did not wish to delegate authority for the application as he believed this would ‘take it out of the public eye’ and ‘into a back room somewhere’. Planning officers confirmed that the application would be decided in consultation with the chair and vice-chair and may return to the committee if necessary. Plans for the 1,500 homes have been subject to 70 objections, including from Felpham, Middleton-on-Sea, and Climping Parish Councils.

Southern Water and Natural England have also objected to the plans.

Two statements were submitted in support of the plans and Yapton Parish Council has supported the application ‘with reservations’ based on potential impacts on the rural area and congestion. A separate application to rearrange the layout of Ford Airfield Market was also approved on Wednesday. Organisers say this will allow popular events to continue alongside the proposed development.