Have your say on proposed cycling and walking improvements in Crawley. 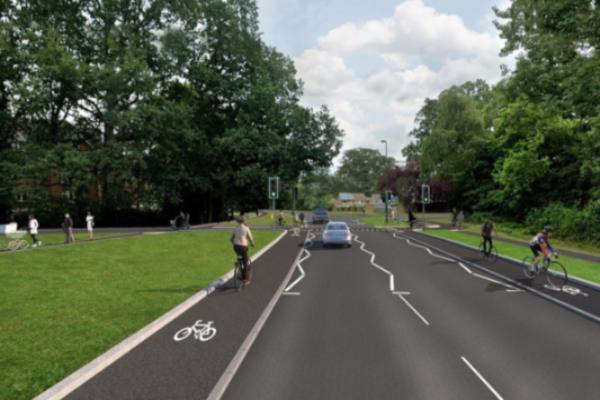 'The proposals comprise two separate but complementary elements, with feedback sought on both'.

Public engagement starts  (14 June) on proposed cycling and walking improvements between Crawley town centre and the Manor Royal Business District. The scheme, which would extend along Northgate Avenue and Woolborough Lane, aims to provide safe, attractive and connected routes for people travelling on foot or by bike, helping to encourage more walking and cycling and reduce congestion on the already busy road network.

West Sussex County Council’s proposals would support safer journeys along the route, provide a gateway into the town centre for cyclists and pedestrians and encourage those active travel/sustainable travel choices.

Interested members of the community are invited to see the designs and speak to a member of the project team at one of our drop-in events:

People are also invited to complete an online survey to help inform next steps for the scheme.

The proposals comprise two separate but complementary elements, with feedback sought on both:

The northern part of the scheme aims to improve links to the Manor Royal Business District, which is one of the largest business areas in the South East. The plans will improve accessibility for people travelling on foot or by bike, helping to encourage increasing journeys via these modes, particularly among commuters. The proposals include widening and improving the existing off-road paths between Woolborough Lane and Manor Royal, and between Northgate Avenue and Woodfield Road. There are plans to provide a two-way cycle lane on Woolborough Lane, with a new link through the underpass. The scheme would also deliver new and upgraded crossing facilities at various locations, with dedicated space for pedestrians and cyclists.

The southern part of the scheme aims to transform cycling and walking facilities along Northgate Avenue, one of the key routes into the town centre. The scheme would deliver one-way cycle lanes on both sides of the road, with kerb separation to physically segregate cyclists from pedestrians and general traffic. There are also plans to reduce the speed limit on Northgate Avenue from 40mph to 30mph, to improve safety along the route for all road users. Existing crossing facilities would also  be upgraded in certain locations, with dedicated space allowing pedestrians and cyclists to cross the road safely.

The proposed scheme is an integral part of Route A of the Crawley Local Cycling and Walking Infrastructure Plan, which was adopted by Crawley Borough Council last year. The scheme has been identified by West Sussex County Council as one of three priority schemes, county-wide, to be taken forward.