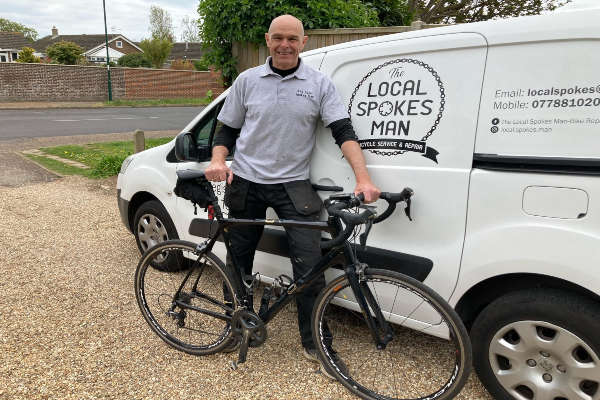 Determined John Lloyd will draw on a reservoir of mental toughness during a remarkable charity cycle ride that will take him from Bognor Regis to Land's End -- pedalling an incredible 300 miles within 24 hours.

John, 54, believes he can maintain at least 15 miles an hour for the duration of his energy-sapping challenge -- on the summer solstice, the longest day, on June 21 -- which he is undertaking to raise funds for the British Heart Foundation (BHF).

It will be the latest endurance test in a long list that includes day return rides from his West Sussex home to Bath, Oxford and two Everest challenges that sees cyclists ascend and descend a given hill multiple times to climb 8,848 metres, the elevation of Mount Everest.

John has been putting in countless hours in the saddle during gruelling training sessions for the event in between running his bicycle service and repair business -- The Local Spokes Man -- from his workshop at his Pagham home.

With wife Tracey offering backing during the ride in a support vehicle, John says he is confident he can ride for 20 hours, allowing time for four hours to take in food and rest at various points en route.

He said: "I'm prepared mentally to overcome and adapt to any issues I have along the way. I am no stranger to endurance. There is only plan A, no plan B. My mind is my strongest asset, but I know this is going to push my limit.

‘This is 300 miles of cycling in 24 hours, ask anyone who cycles regularly, they will tell you how tough it will be. I've done my share of fundraising in my time, and decided to raise money for seeing an old friend raising money for the BHF, I felt I might as well earn them a few pounds, I was doing the event anyway!"

The former printer retrained to become a qualified bicycle technician during the pandemic and set up his business to combine his passion with a desire to help his community. He added: "The inspiration was to do something that I thoroughly enjoy and lockdown was the catalyst. I absolutely love working from home. I'm doing something that I love, and transferring that into other people's bikes and I enjoy helping people out."

To donate, head to https://www.justgiving.com/fundraising/300in24