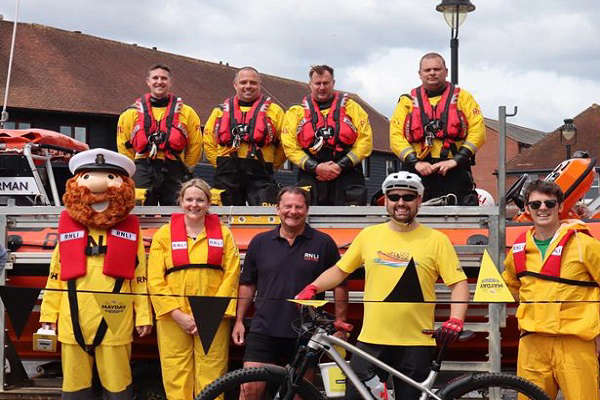 The fundraising branches of the Royal National Lifeboat Institution (RNLI) in Littlehampton and Basingstoke have raised an incredible £2,619 for the charity’s Mayday fundraising appeal – making them the number one fundraising team in the UK for the campaign.

The branches, which raise vital funds for the RNLI’s 24/7 search and rescue lifeboat service and seasonal lifeguard service, ran and cycled a combined 302 miles during May, in aid of the RNLI’s annual appeal.

Cian said: ‘The Mayday campaign was a huge success for team Littlehampton and Basingstoke, and superbly demonstrates what can be achieved by partnering shore-based branches with in-land fundraising branches. I look forward to working with Basingstoke Fundraising Branch again in the future. I would also like to thank our fantastic supporters. They have helped us raise a terrific sum of money, for which we are all incredibly grateful. Their donations will help to ensure that the RNLI can continue to save lives at sea.’

Kate added: ‘It was a pleasure to complete our Mayday challenge together. As we finished, the crew of Littlehampton RNLI returned from a training exercise. Seeing them made all the early morning runs with achy legs worthwhile.’

The RNLI’s annual Mayday fundraising campaign raises funds to keep lifesavers kitted and trained to deal with emergencies – so that they can save lives at sea. To find out more, visit: https://rnli.org/mayday