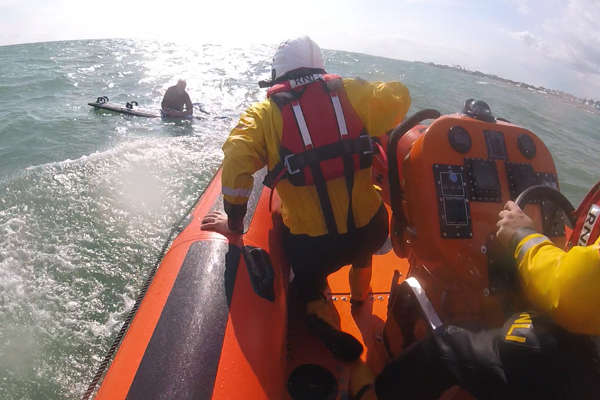 On the afternoon of Saturday 11 September multiple 999 calls were received by HM Coastguard reporting a windsurfer who was experiencing difficulty offshore of Middleton-On-Sea.

The windsurfer had been enjoying the Force 4-5 SW winds sailing up to a mile from shore when his mast suddenly snapped in half during a gybe manoeuvre leaving him stranded and drifting with no way of returning to land. The afternoon was bright and breezy with many people on the beach enjoying the views. Fortunately, members of the public recognised that the windsurfer was in need of assistance and called 999 to ask for the Coastguard, alerting them to the location of the person in distress.

Following a request from HM Coastguard Littlehampton lifeboat station launched their B-Class lifeboat Renee Sherman and the volunteer crew were soon heading westwards in choppy seas to locate the individual. Although the air was clear waves limited visibility on the sea’s surface, but because the windsurfer had stayed with his board rather than try and swim to shore he was more easily located and the crew were soon able to bring him aboard the lifeboat. They also recovered and stowed the board and sail which aroused the curiosity of a seal who had been calmly watching the scene unfold from a location nearer the shoreline. After confirming that the casualty had not ingested any seawater during his time in the water the crew were able to return him and his windsurfer to shore where he was assisted by a friend in beaching the equipment.

“The windsurfer did the right thing staying with his board even though the equipment was broken. It is much easier for our crews to locate a person and their equipment as a larger target is more visible in the swell than someone attempting to swim for shore. A dismasting is a dramatic event, but fortunately in this case the windsurfer was unharmed, albeit a little cold and shaken by the experience. We thank the members of the public who called 999, asking for the Coastguard, for their vigilance.”

The RNLI charity saves lives at sea. Its volunteers provide a 24-hour search and rescue service around the United Kingdom and Republic of Ireland coasts. The RNLI operates 238 lifeboat stations in the UK and Ireland and more than 240 lifeguard units on beaches around the UK and Channel Islands. The RNLI is independent of Coastguard and government and depends on voluntary donations and legacies to maintain its rescue service. Since the RNLI was founded in 1824, its lifeboat crews and lifeguards have saved over 142,700 lives.