Worthing motorcyclist disqualified from driving after pulling ‘wheelie’ on A24 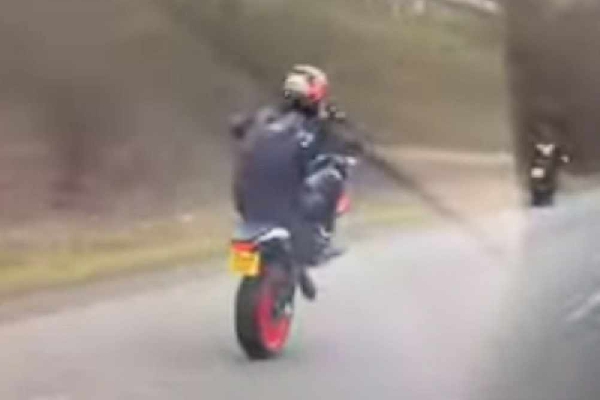 A motorcyclist caught pulling a ‘wheelie’ on a dual carriageway has been disqualified from driving.

The rider narrowly avoided a number of potholes as he carried out the dangerous manoeuvre, which was witnessed by officers travelling in an unmarked police car.

The incident occurred on the A24 northbound, between Southwater and Hop Oast Roundabout, on the afternoon of 20 February.

PC Darren Balkham, who recorded the footage as a passenger in the police vehicle, said: “As a road user, the manner of riding I witnessed fell way below what I’d expect of a safe and competent motorcyclist. Had the rider come off his bike, he could have caused serious injury or worse to himself or someone else.”

A Notice of Intended Prosecution was sent to the registered owner of the motorcycle, Oliver Summers, 26, of Brighton Road, Worthing.

He claimed responsibility and conceded the manner of his riding was unacceptable.

At Crawley Magistrates’ Court on Thursday 6 May, he pleaded guilty to dangerous driving and was disqualified for 15 months. He was also given a 12-month community order, requiring him to carry out 150 hours of unpaid work, and must pay court costs totalling £180.

PC Balkham added: “This is a main road we’re talking about – not a race track – and there is no place for this sort of behaviour on our roads.

“A momentary act of stupidity could cause a lifetime of heartache for a lot of people. Dangerous driving or riding has serious ramifications, not least a criminal record which will affect this rider for years to come.

“In my role as Dedicated Football Officer for Surrey and Sussex Police, I know that the overwhelming majority of football fans are responsible and law abiding, but there’s always a small minority who let themselves down and give others a bad name. The same can be said of motorists, and it’s the small number who misuse our roads – and risk the lives of themselves and others – who we will continue to take action against.”

Chief Inspector Michael Hodder, of the Surrey and Sussex Roads Policing Unit, said: “This case demonstrates how officers from different divisions work together with to achieve our three force priorities: to protect communities, catch criminals and deliver an outstanding service. It also shows that we may not be everywhere all the time, but we could be anywhere at any time.”