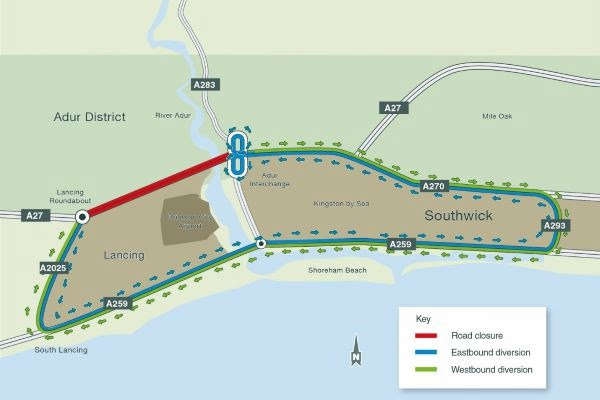 Plan ahead if you're using the A27, is the message from National Highways as the road will be closed two out of the next three weekends for essential maintenance work at Shoreham.

The closures will be in place to replace the waterproofing material and the joints in the bridge which carries the A27 over the Adur viaduct near Shoreham.

Work was planned to take place earlier this month, but was rescheduled due to the number of evenets taking place in the area which would have had an impact on people using roads in hte area.

The work will now take place over the following two weekends:

Weekend one: eastbound A27

The eastbound A27 will be closed from the Manor Road roundabout to the A283 Shoreham Junction, from 8pm on Friday 24 September though to 6am on Monday 27 September.

During the closure of the eastbound carriageway, traffic will be diverted south down the A2025 Grinstead Lane, east along the A259 Brighton Road in Portslade-by-sea, north on the A293 Church Road/Trafalgar Road, west along the A270 Old Shoreham Road, join the A27 westbound and turn at the A283 Shoreham junction to access the eastbound carriageway.

The westbound A27 will be closed from the A283 Shoreham junction to the Manor Road roundabout, from 8pm on Friday 8 October through to 6am on Monday 11 October.

During the closure, traffic will be diverted off the A27 at the A283 Shoreham junction, travel round the junction to join the A27 eastbound, exit at the A270 Southwick/Shoreham junction, east along the A270, south down the A293 Church Road/Trafalgar Road, west long the A259 Brighton Road then north on A2025 grinstead Lane.