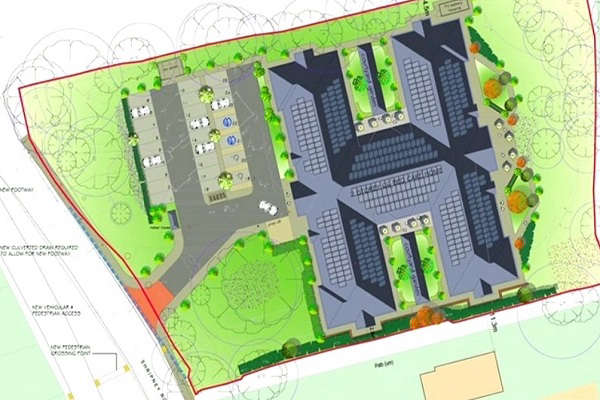 A new care home is set to be built in Shripney near Bognor Regis after planners gave the proposals unanimous approval.

LNT Care Developments’ plans for a 66-bed care home at The Cottage, Shripney Road, were given unanimous approval on Thursday (28 April).
The existing building will be demolished and replaced with a two-storey, H-shaped care home.

Facilities available to residents will include communal dining rooms, a cinema, a small library, a salon, a small clinic, a café, laundry rooms, and kitchens.

A total of 25 car parking spaces are proposed, including a ‘drop off’ area, but the developer said these would mostly be used by staff and visitors as residents do not have cars. The developer will also construct a new path between the home and the bus stop outside the Robin Hood pub for accessibility.

During the Planning Committee meeting on Thursday, Arun District Council planning officers said: “Many members on this committee will no doubt be familiar with this site – it’s been with us several times – and, as the long history within the agenda indicates, it is currently a single dwelling with permission for up to 31 replacement dwellings.”

Both Bersted and Aldingbourne parish councils objected to the plans.

Bersted PC said it would be ‘out of character’ with the area and claimed that local public transport links are inadequate. Aldingbourne Parish Council are also concerned about transport links and the potential impact on local health services.

But Claire Howe, an agent for the developer, said there is a ‘clear need’ for a new care home which will also provide employment.

“LNT Construction Group is the UK’s leading developer and operator of care facilities for older people,” she said.

“This has been identified as a suitable location for development based on a detailed analysis of the local area, which demonstrated a clear need for a care facility. The development will generate between 50 and 60 new jobs, as well as those available during the construction period, almost all of which will be offered to suitable local candidates. Concerns have been raised by the parish council over the potential for flooding. This has been addressed in our drainage scheme and the local food authority are generally satisfied with our approach. In conclusion, the proposed development will be a benefit to the local community, providing a much needed care facility and employment for the area.”

More details about the new care home can be found at the council’s planning portal using reference: BE/176/21/PL.