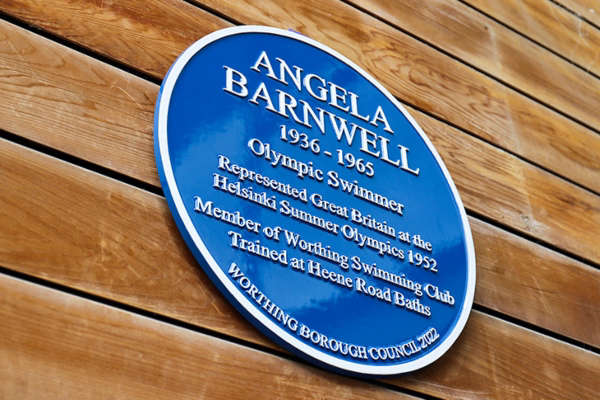 A Worthing Olympian swimmer who represented Great Britain when she was just 16 years-old has been honoured with the unveiling of a blue plaque.

Angela Barnwell was just 11 years old when she took up swimming seriously and through dedication, excellent coaching and practice with Worthing Swimming Club at the former swimming baths at Heene Road quickly turned into one of the nation's most promising sporting talents.

Following the Davison High School student's early success in county competitions, Angela was soon selected at just 16 years old to race for Great Britain at the 1952 Helsinki Olympics. There she made the 100 metres freestyle final and became the fastest woman swimmer in Britain into the bargain.

What was more remarkable was that the brave youngster had, just four days before her first Olympic race in Helsinki, been hit by a tram, injuring her thigh and elbow. Despite this she was determined to compete and put in a remarkable performance in the final.

Back in her hometown there was huge support for Angela, and when she returned from Helsinki, thousands of people lined the streets to welcome her back and celebrate.

Angela continued to represent Britain in several international events after her Olympic success.

A little later in her life, Barnwell married the former Great Britain water polo captain Duncan Kemp in 1958 and had a daughter named Bernie. But when Bernie was just four years old Barnwell was admitted to St. Bart's Hospital in London with Hodgkin's Disease. Two weeks later she died aged just 29.

Angela's family, including her husband Duncan and her daughter Bernie Skyes, travelled to Worthing this week to join the Mayor of Worthing, Cllr Henna Chowdhury, as she unveiled a blue plaque in her honour at Splashpoint Leisure Centre.

“I am absolutely delighted to unveil this plaque to a great Worthing sportswoman who should not be forgotten and especially pleased that Angela's family can be here too.

“When we are seeing this very week England's women's football team inspiring a new generation of young girls to take part in sport it's great to see that Angela was a trailblazing female athlete 70 years ago. Hopefully the plaque will help more young girls find out about this Worthing Olympian and, who knows, maybe follow in her footsteps.”

The blue plaque was campaigned for by The Worthing Society and Worthing Swimming Club, and was funded by Worthing Borough Council.