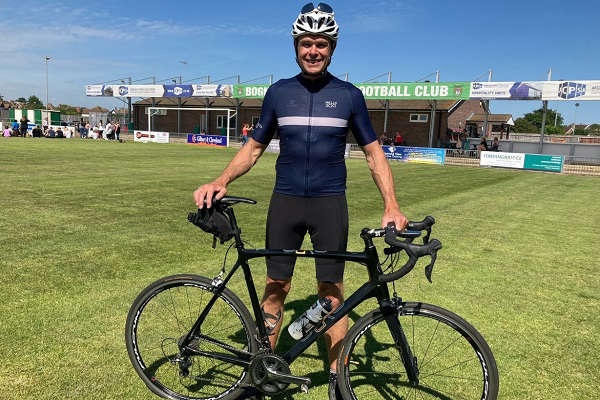 Endurance cyclist John Lloyd proved he has more than one goal in mind when he stopped off at the home of Bognor Regis Town as he continues his gruelling training ahead of a charity bike ride that will take him from Nyewood Lane to Land’s End.

Rocks fan John will use pedal power to cycle an astonishing 300 miles within 24 hours when he sets off on his lung-busting trip on the summer solstice, the longest day, on Tuesday (June 21) – to raise funds for the British Heart Foundation (BHF).

And having just completed an exhausting training run from his home in Pagham to Bath, a total of 233 miles, he saw donations increase as he looks to raise upwards of £1,000 to help the cardiovascular research charity.

John, 54, who will have wife Tracey providing backing from a support vehicle, said: "I feel confident and training has gone well. To see so many generous people donate to such a worthwhile cause is an inspiration and if anyone can find it in their hearts to donate a little something I'd be eternally grateful

"I'll be leaving at 2am on the Monday morning. and I shall be stopping every 60 miles or so for food and drink. I need to maintain an average speed of 15mph and will take in 13,000 feet of climbing. My last big training run went well and my ride to Bath and back took 18 hours in total, with 15 hours of cycling and stops totalling three hours, and I burnt 10,000 calories."

John, who runs his bicycle service and repair business – The Local Spokes Man – from his workshop at his home, has the backing of the Nye Camp club and manager Robbie Blake, who said: "All of us at Bognor Regis Town wish John all the very best on his journey and we look forward to hearing that he has smashed it while raising money for BHF. I can't begin to imagine the physical and mental strength John will have to call on to achieve his goal and have nothing but admiration for his efforts."