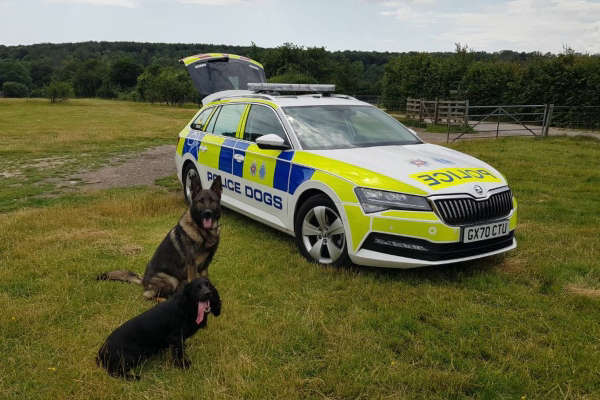 Two determined police dogs helped track down drugs suspects following a vehicle stop on the A27 at Fontwell.

Officers from Sussex Roads Policing Unit were alerted to a vehicle linked to suspected county lines drugs supply at 11.20pm on Wednesday, July 27.

The team stopped the vehicle, but the driver and the passenger inside attempted to run from the scene.

A driver was detained at the roadside, but the passenger ran through a hedgerow by the roadside.

Meanwhile Sergeant Matt Songhurst, from the Sussex Police Dogs Unit, was called in to help find and detain the passenger.

Sgt Songhurst said: “I arrived at the scene with PD Perry, a three-year-old German Shepherd, and he immediately got to work to find the passenger.

“He found the suspect hiding after he attempted to run through a hedgerow, and we were able to arrest him.

“Meanwhile PD Ezra, a three-year-old Cocker Spaniel, helped search the area, and located a package which had been discarded.

“It contained multiple deal bags of what we believe to be crack cocaine and heroin.

“Thanks to PD Perry and PD Ezra we were able to arrest the two suspects and ensure that we gathered evidence of their involvement in drug dealing.”

A 23-year-old man was arrested on suspicion of money laundering and possessing a class A drug with intent to supply. He has been bailed, pending further enquiries.

A 28-year-old man was arrested on suspicion of money laundering, possessing a class A drug with intent to supply, driving while over the prescribed limit for drugs, and driving while disqualified. He has also been bailed.

Investigator Neil Carter said: “These arrests showed great teamwork between our RPU officers and our police dogs. It demonstrates our determination to disrupt the supply of class A drugs which cause so much harm and crime in our communities.

“Information about drug dealing and antisocial behaviour in your community can be reported to Sussex Police online or via 101, alternatively contact CrimeStoppers anonymously on 0800 555 111.”