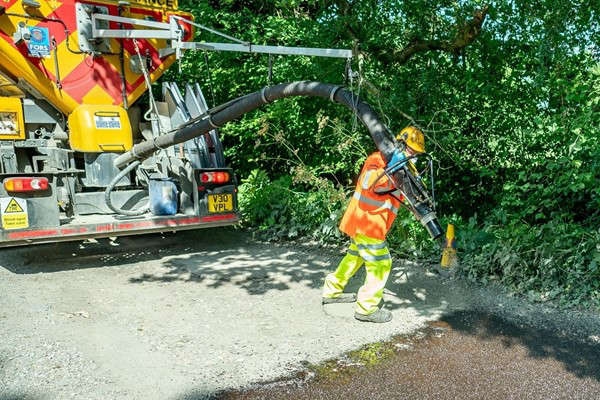 Two Velocity road patching machines are being deployed across West Sussex to proactively seek and fill potholes before the regular inspections by Highways teams.

The initiative is part of a two-pronged “attack” on potholes, with the innovative Velocity system used in addition to the traditional inspection/repair regime.

The Velocity road patchers are used to fill potholes big enough to need filling under safety criteria but also to repair defects likely to further deteriorate and reach that level in the near future.

When selecting routes to attend, the teams focus on those with the highest, historic pothole numbers, to try to optimise value for money and results.

In the first four weeks of the 2022/23 financial year, the two road patching machines completed just over 1,100 repairs and treated approximately 3,000sqm of the highway network.

Joy Dennis, the County Council’s Cabinet Member for Highways and Transport, said: “We know how important the condition of our roads is to residents and are proactively tackling the issue of potholes.

“The deployment of two Velocity machines follows last year’s successful trial, when we were impressed with the speed and quality of the patching system and the audited results post-repair.

“Fixing potholes is really important, but we also have our ongoing £32million investment in highways and roads, which includes an unprecedented level of investment in road and footway repairs in recent years. Within the programme are a significant number of road resurfacing schemes. Resurfacing a road produces a smoother surface, reducing road noise and increasing resilience to potholes – a longer-term solution to pothole issues compared to small-scale repairs.”

Also agreed in the council’s capital budget in March was a further £21million funding, over the next five years, for priority areas such as carriageway improvements and repairs.