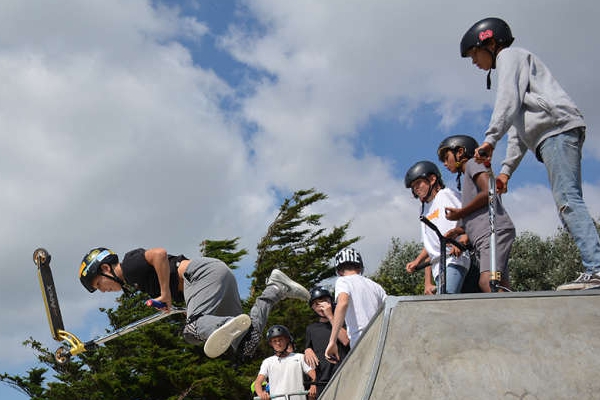 Skaters gave the newly refurbished skate park in Littlehampton the seal of approval at an official skate jam opening event this week.

The town’s thriving skate community have been testing out their skills on the  Sea Road facility since September 2019, but poor weather and then Covid-19  meant an opening event had to be put on hold until now.  Run by the facility’s designers - Maverick Industries Ltd - the skate jam featured  professional riders running demo sessions and competitions to win prizes.

Attendees included Chairman of Arun District Council, Cllr Jim Brooks, and Leader of the Council, Cllr Shaun Gunner, along with Littlehampton Mayor, Cllr Michelle Molloy, and representatives from the Town Council.  Buoyed by Team GB’s Olympic medal success, more than 100 people turned up to the event on skateboards, BMX bikes, and scooters to show off their skills  in the sun.

Chairman Councillor Jim Brooks said: “Skateboarding is a thriving sport and  even more youngsters will be keen to give it a go after seeing the success of  Sky Brown at the recent Tokyo Olympics.

“We’re delighted to see the skate park officially open. We knew it would be a hit as we asked skaters what they wanted before doing the refurbishment to  ensure that we catered for their wishlist.

“It’s great to be here today and to see so many young people of all abilities having such a great time – and some really impressive displays too!”

Littlehampton Mayor, Councillor Michelle Molloy, said: “The skate park is a fabulous addition to our town’s facilities. Today’s turnout is proof of how much this community resource is important to young people. I was delighted to learn that there’s a growing skateboarding community who meet at the park on a weekly basis to skate and learn new skills together.”

Attending the Jam was Littlehampton based ‘Board AF’, an informal skateboarding group who through their passion for adventure have grown to an impressive size of more than 100 members.

Founding members, Josh Lane and Mark Harfield, said: “Each Sunday between 8am and 11am skateboarders of all abilities gather at the park to share their experience and learn together. It has grown quickly and sometimes there’s 70 of us here with families coming down as far as from London. We grew up in Littlehampton and always shared our love for skateboarding. The group is a way of giving something back and our dream is to open an indoor skateboarding venue. Make sure you look us up on social media.”

Skaters Izzy and Lily-Rose, both 12, said that they used the skate park as often as they could and thought the new facility was amazing.

Izzy said: “It’s very, very good. There’s always a nice community here when we come down, they give you tips if you’re struggling and if you fall over, they come over to make sure you’re okay.”

Lily-Rose said she’d been skateboarding for nearly a year because her brother and his friends were skaters. She added: “There’s loads of people here to help you to learn tricks, it’s a great community, we always really enjoy coming down.”