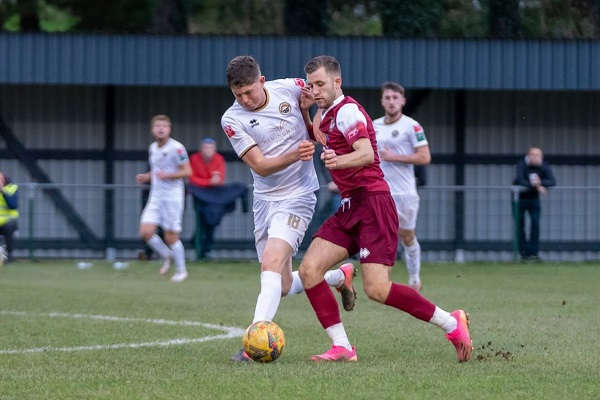 4-2 on penalties defeat at Sundays away game in Truro.

Jordy Mongoy’s thunderbolt proved fruitless for a gutsy Rocks side as they suffered the agony of a penalties shootout defeat in the first round of the FA Trophy against Truro City.

Mongoy brought Bognor level at 1-1 with an unstoppable shot from the edge of the box on 66 minutes in a second half they dominated — and the wonder strike ultimately took the tie to spot-kicks after 90 minutes.

But both Nathan Odonkonyero and Kayne Deidrick-Roberts saw their tame efforts saved by the excellent James Hamon and the Southern Premier League outfit went through to the second round with a 4-2 penalties victory.

It was cruel on the visitors at Bolitho Park, the Devon ground City share with Plymouth Parkway — the Rocks definitely deserved a bit more luck after an impressive second-half display. It came following a flat performance before the break that left them trailing 1-0 at the interval thanks to Tyler Harvey’s 37th minute opener. The live-wire hitman curled a sumptuous shot beyond despairing Rocks keeper Amadou Tangara and Paul Wotton’s side, buoyed by their advantage, piled on the pressure though failed to add to their tally in this period of authority.

Bognor showed remarkable resilience and took the game to the White Tigers through long spells of possession. A forced shuffle of the pack was needed when influential central defender Joe Cook limped off on 58 minutes and with only two players on the bench — Craig Robson’s withdrawal a late blow — Charlie Bell came on.

Thrust into the heart of midfield, he oiled the creative fulcrum and pulled strings for both Mongoy and Odokonyero with perceptive passes but to no avail. His arrival boosted what was already a a commanding second-half display, inspired by Ashton Leigh’s man-of-the-match makeshift role in the heart of defence, but a deserved second goal eluded them.

Harrison Brook, the former Pompey winger, illuminated the left hand side of the attack and showed poise and purpose and, perhaps even more tellingly in the long term, potential to continue to flourish.

Skipper Harvey Whyte rolled up his sleeves to lead by example and was matched in his endeavours by the ever-willing Calvin Davies. Jake Flannigan and James Crane were also industrious, while Ethan Robb, in central defence, exuded a calm confidence in and out of possession. In turn, though, the lottery of penalties followed and the Rocks met their arguably ill-deserved fate.

Coach Robbie Blake said he and boss Jack Pearce were proud of their players. He added: “To go out on penalties is always difficult to take and this was the case but we’re immensely proud of the way we fought our way back into the game with a very impressive second half.

“Our first half wasn’t great and at the break we asked the lads to try to get us a foothold and the way they responded was magnificent. I thought we played a lot of football, controlled possession for large parts of the game and I honestly think had we got a winner it would have been entirely deserved. But it wasn’t to be and we must dust ourselves down and go again. I should also mention our supporters who once again travelled in good numbers and their backing is so appreciated.”