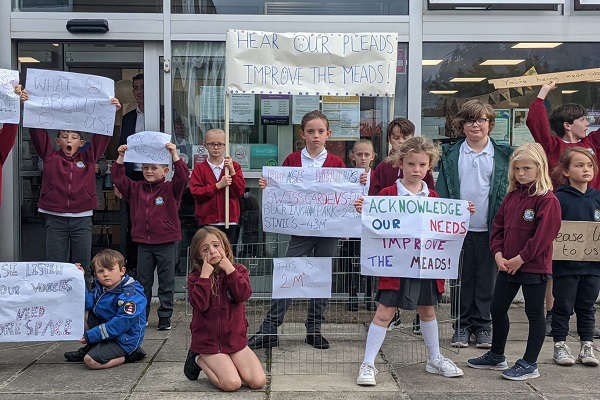 West Sussex pupils held up placards outside a public meeting on Thursday (9th June) to call for an improvement to their play space.

The young activists are from Swiss Gardens Primary School and, alongside their parents, are calling for improvements.

Currently, the pupils have access to a concrete area and an area of The Meads leased to West Sussex County Council by Adur District Council.

But parents say the space can sometimes be too muddy or dangerous to play on and called for an all weather pitch.Despite more than a quarter of a million pounds being ringfenced for improvements, some in the community disagree with an artificial pitch for environmental and other reasons.

One parent asked why a solution had ‘taken so long’. Another said: “As a parent body we are not going to be happy until our children have the required amount of play space throughout the year.”

A letter to parents in April reads: “We have the smallest amount of play space per child of any school in Shoreham by a factor of many times.”

Angus Dunn, who is both a county and district councillor, confirmed that Adur District Council would oppose an artificial pitch if it was requested.

This follows objections from Friends of the Meads members and a public consultation which showed a preference for keeping grass. A 2020 school drop in found a preference for a 3G artificial grass pitch but a public drop in session saw the majority vote for improved natural grass.

Kirsten Wild, of Friends of the Meads, said: “We respect where all of you are coming from and we are always open to talk.”

But, she argued: “Changing the surface to something synthetic won’t make the available play space bigger by not a single square centimetre. Possibly, granted, a bit more useful in the winter months but also baking hot and pretty unpleasant for little ones at the school throughout the sweltering summer months.”

Ms Wild suggested that transforming the school car park into a play space would be a good option. “We’re not in any way looking to put a fly in your ointment,” she concluded.

Parents have also put forward a proposal for a ‘hybrid’ surface of grass and artificial grass. Mr Dunn said social media had contributed to a negative relationship between all parties. “Facebook is good for finding cats but not so good for things like this,” he said. “Being candid, I don’t think it’s entirely the council’s fault that things haven’t gone very smoothly. We all want the same thing for the children.The council will be inviting governors to a meeting and we are committed that this should not take another six years. The way decisions – or non-decisions – are made at council can sometimes be a bit of a maze".

He said the relationship between the various groups should be ‘reset’ and the council is seeking to stop a ‘them and us position’ with ‘no options off the table’.

Parents were also concerned that the developer could ask for the money back as so much time had passed.

But Graham Olway, Assistant Director for School Organisation at West Sussex County Council, said it is in the county’s bank account and committed to asking about a meeting ‘the next morning’ to find a way forward.

Green councillors for St Nicolas ward, Gabe Crisp and Julian Shinn, posted a statement about the Meads, which was a key local election issue for them.

They announced ‘full support’ for both ADC’s and WSCC’s decision not to allow synthetic grass.

“This decision is based on a full and robust public consultation and reflects the role which the Meads plays as a popular, natural, and bio-diverse resource for the whole local community,” said the statement.

Whatever the solution or compromise, one parent highlighted an important point: “Our children don’t have time for this to drag on – they’re only in school for seven years.”