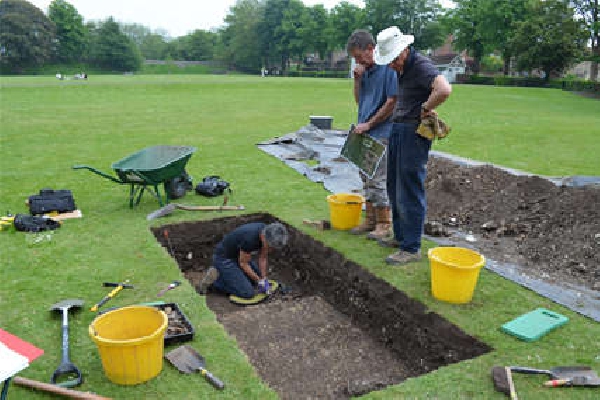 Volunteer archaeologists are putting trowel to soil after embarking on a further excavation of Chichester's Priory Park.

The dig started on Tuesday 31 August and is being led by Chichester District Council's archaeologist, James Kenny, in partnership with the Chichester and District Archeology Society whose volunteers will be hoping to unearth more secrets of Chichester's Roman and Medieval past.

The excavation was originally meant to take place last summer, but was postponed because of the Covid pandemic. The work will take place over two weeks (except Sundays) and will finish on Tuesday 14 September.

On Saturday 11 September there will be a special Public Day which will feature a series of talks about the society's findings. These talks will take place at:

Similar excavations were held in 2017 and 2018. The first focused on the smallest of the buildings which were found using ground penetrating radar equipment.

This building was discovered to be part of a very well-preserved Roman bathhouse, with a series of warm and hot rooms, complete with an underfloor heating system. The building is thought to have been part of a luxurious Roman townhouse, which would have been occupied by one of the city's wealthiest citizens.

In 2019 an area between the bathhouse and the building to its south was investigated.

This time, the team will be excavating another trench between the two buildings in order to try to prove the connection between them. They will also be hoping to identify the furnace which powered the bathhouse as well as investigating the medieval occupation of the site.

Datable finds indicate that the bathhouse was probably constructed in the early 2nd century AD and used into the 4th, when it was decommissioned and its building materials were removed for use elsewhere.

''The excavations which have taken place so far have been absolutely fascinating and revealed so much information about our city's past," says Councillor Susan Taylor, Deputy Leader and Cabinet Member for Planning at Chichester District Council. ''The events have been extremely popular with members of the public but sadly we couldn't hold the public dig last year for obvious reasons.

''I would strongly urge people to come along and see this archaeology in action and hear more about the finds and their significance at the Public Day. It's not often you get to see a live archaeological dig in your local area and I'm sure that people of all ages will find it extremely interesting. And if you feel further inspired to find out more then our Novium Museum in Tower Street, Chichester houses the remains of a Roman bathhouse and many other Roman finds."