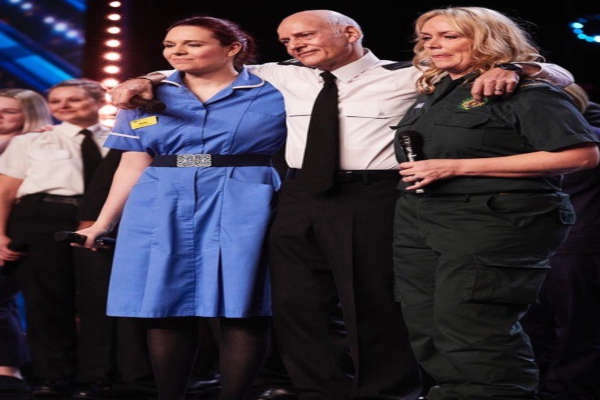 PC Keren Moore and PCSO Demetrius Georghiou (known as Demi) are part of ‘The Frontline Singers’ – a group of 21 key workers formed during the pandemic. They came together through an online search, and the group also includes West End performers who each adapted during the pandemic - working nightshifts in supermarkets, volunteering in the community with vulnerable people and working in a pharmacy respectively.

Demi’s daughter Gina and her partner James Beeny, who are both professional songwriters, penned a song entitled ‘Strange Old World’, which was performed by the group on stage in front of the show’s judges David Walliams, Alesha Dixon, Amanda Holden and Simon Cowell. It received a standing ovation from the audience.

The song was recorded remotely amongst the group during the first national lockdown and raised funds for the NHS, doubling its fundraising target within one week of being released online.

Like many people with loved ones on the front line during the pandemic, Demi’s family were consumed with an overwhelming fear whilst he continued to work. This gave his daughter Gina the idea to write a song around the situation the world found itself in. When Gina told her dad about the opportunity to perform on BGT, he couldn’t believe it.

He said: “BGT is actually my favourite show. To perform on it was like a Christmas present”.

The day of the actual audition was the first time the group had been whole, physically singing together since their formation. He said: “We’ve had five or six rehearsals but some of us have been missing at times due to work and us being all over the country. That day was the first time we’ve all been together in the same building”.

He went on to compliment everyone involved with the show. “They all treated us with overwhelming respect. When we were performing, I felt a bond of unity being built there and then between performers, the judges and the audience.

His vision for the song was clear. “We want it to be the anthem of the pandemic. We want to get as far as possible in the competition to keep singing and to keep letting people know that we’re here and we’re all in this together”.

Keren also said she had loved being part of the group. She said: “Demi approached me when they were gathering people in lockdown to record parts of the song and edit them together. It was shown on YouTube and on the local TV. The group includes teachers, support workers, retail, doctors and nurses”.

Speaking of the performance, she continued: “It was so exhilarating on the night; I had such nervous excitement. It was a long day but so worth it to have the amazing experience with the others. I have been teaching drama, dance and singing on and off since I was a teenager. Singing is my own therapy and helps me with PTSD that was triggered when on a job a few years ago. It really helps when I am doing something for me”.

The performance has had more than 1.2 million views on Facebook and can be viewed online via YouTube here.