Teen from West Sussex shortlisted to design a coin in football 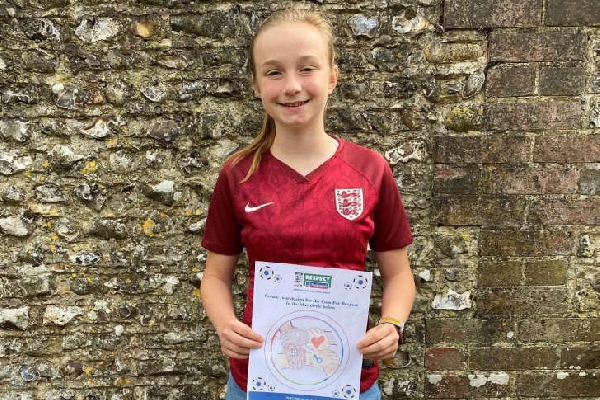 13-year-old Ruby, from Tangmere is one of 11, whose design could be chosen to be used at grassroot games in the coin toss at the beginning of the match.

Its part of a campaign by The FA and Nationwide Building Society launched a new initiative to promote mutual respect on and off the pitch.

The coin toss is a symbol of fair chance at the start of every game, but before this competition, no official coin ever existed.

The competition, which gained the support of England’s football stars Jordan Nobbs, Nick Pope, Beth Mead and Tyrone Mings, plus legends David James and Karen Carney, received over 400 entries, with Ruby selected as part of the final 11.

Their coin design was inspired by the idea that equality is important on and off the pitch. Ruby wanted to show that the campaign to them meant highlighting everybody deserves respect.

Ruby said: “My design aims to show that no matter what race or gender you are, underneath that, we all have the same heart and we should accept everybody no matter their differences.

Everybody deserves equality and the world, including football, is a better place with more love, empathy and respect.

“It’s great to be one of the 11 shortlisted designs and thank you to everybody who votes for me!”

Now, Ruby needs your help to see their design come to life. The final decision rests with the general public. Voting opens on Monday the 19 th July and will close on 1 st August. You can view all of the shortlisted designs and cast your vote by clicking here.