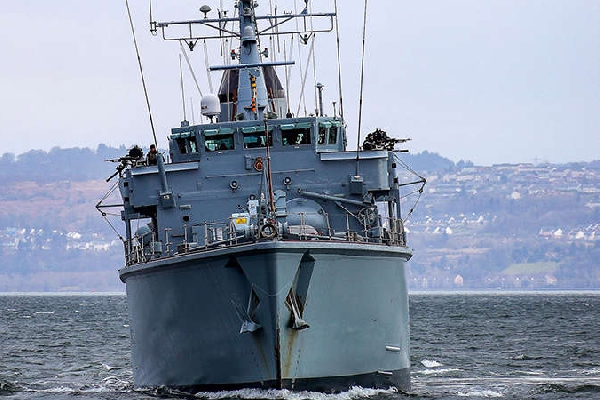 HMS Shoreham will pay an emotional final visit to the Sussex town bearing her name this week.

The minehunter is spending four days in Shoreham, allowing the various local groups and associations who've been associated with the ship throughout her 20-year-career to say their farewells.

And on Saturday morning the public will be able to show their appreciation for the 41 men and women who've carried the town's name around the world on front-line operations since 2002.

They will form up ahead of a ceremony and parade in front of the Shoreham Centre from 10:45am, during which the Scroll granting them Honorary Freedom of Shoreham is returned to Adur District Council for safekeeping.

The district's highest honour was granted upon the ship in 2011, since when sailors have paraded through the town with full military pomp and ceremony on three occasions, most recently in 2017.

“It is a real privilege to bring HMS Shoreham back to her hometown where she was first commissioned - and to hand-back the Freedom of the Adur District awarded in 2011 ahead of the Ship's decommissioning later this year.”

“Over her 20 years of service - with nearly half of these spent deployed in the Gulf, HMS Shoreham's strong maritime links with our hometown have been of great support to a generation of sailors - and it is right that we express our thanks to Shoreham during this visit.”

“I will be delighted to see the captain and crew of HMS Shoreham again and accept back the Freedom scroll that the District gave the ship more than ten years ago.

“There has been a fantastic relationship between residents of the District and HMS Shoreham and we have watched her serve with distinction around the world helping to keep it a safer place.

“On Saturday, on behalf of residents, I will be delighted to be leading the thanks to the ship and those who served on her. It will be an emotional but stirring occasion.”

The Shoreham story in the Royal Navy goes back to January 1694 with five ships named after the town. Before the present-day vessel, Shoreham No.4 was a sloop which served extensively in the Gulf, Mediterranean and Indian Ocean before and during World War 2.

The current HMS Shoreham, No.5, was commissioned in Shoreham on 20th July 2002, since then she has maintained close ties with the town despite conducting prolonged operations either in home waters, as part of NATO task groups in European waters, or in the Gulf.

Shoreham would spend several years at a time deployed to the Middle East, swapping her entire crew every few months to sustain her on operations alongside other Royal Navy minehunters based in the region.

The ship has clocked up more than 120,000 nautical miles - enough to take her around the world five and a half times - and visited more than 30 ports at home and abroad while serving under the White Ensign.

She is one of five Sandown-class vessels, which are normally based at Clyde Naval Base in Faslane, Scotland. Her crew of 41 includes seven specialist divers, all focused on the clearance of hidden dangers in the sea.

This could mean searching for - and safely removing - historic mines which remain from past conflicts, or playing a vital role in detecting and destroying the latest threats and helping to make sure larger ships enjoy safe passage.

To assist in their tasking, the Sandown class has a unique glass-reinforced plastic hull which reduces the ship's magnetic signature to prevent the ship triggering a mine.

Before departing for Rosyth in Scotland where HMS Shoreham will decommission, crew will be showing naval associations, cadet groups and other affiliates, and they will also pay their respects at the town's war memorial.