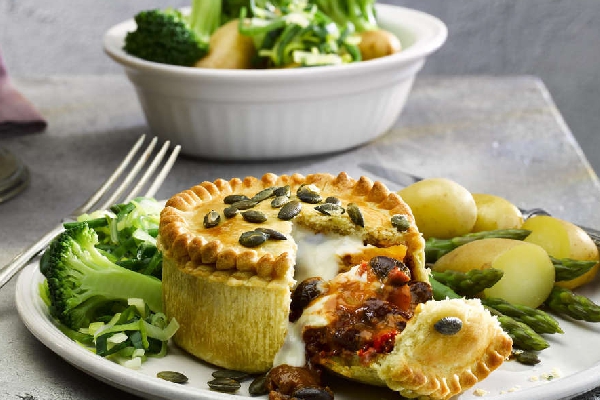 It's not too often you get the chance to reduce your carbon footprint as you tuck into a tasty pie! But that's just what you can do now thanks to the launch of an exciting new savoury snack from an award-winning West Sussex baker.

Turner's Pies, winner of a clutch of top honours at the British Pie Awards, have created a keenly anticipated Butternut Chilli and Cheese pie and it has already won favourable reviews.

Phil Turner, managing director of the business, has overseen the launch of the new pie and is delighted with the outcome and how well it has been received. Phil explained: “We wanted to create a new pie flavour that would complement the current range, becoming loved by our current clientele, while ensuring we can continue to be more inclusive of potential dietary requirements, helping others taste Turner’s Pies too.”

Interest in plant-based diets has grown significantly in recent years, with vegan and vegetarian diets becoming more popular -- it's estimated that three per cent of the UK population follows the regimes.

And there has been a growth in foods suitable for vegetarians and vegans, which can also be included in a plant-based dietary approach.

Phil, whose company has stores in Chichester, Bognor, Rustington and Worthing, said: "We have moved with the times to produce these pies that are suitable for a plant-based diet and after a long time in the making and lots of pie tasting to ensure ALL of our customers would love it, we have been blown away by the response from those who have enjoyed them.

"Not only can eating plant-based food reduce your own carbon footprint massively but with our pie it’s a very tasty way to do it. The reaction from our taste-testers has been really encouraging and we're convinced our customers will really enjoy the pies as well as the ethos behind it.

“There is a little bit of spice that will keep you on your toes and will have you wanting a plant-based diet even more than once a week. Keep an eye out for our free tasting sessions which will be heading to our stores."

The news comes as the business reflects and celebrates many accomplishments of 2021. In the past 12 months Turner’s Pies is proud to have partnered with the Too Good To Go scheme -- offering delicious, unsold food from local shops and restaurants so it doesn't go to waste -- since launching their partnership, Turner's Pies have saved 1,718 meals and 4.29 tonnes of CO2e.

Phil added: "Reducing our carbon footprint is important to us -- we already source our produce from local suppliers where possible-- and we wanted to go that step further by reducing our food waste too. Partnering with the Too Good To Go scheme helps us do just that."

The desire to embrace fairness is paramount to the firm and Phil explains that this is why Turner’s Pies look after their staff by ensuring they earn at least the national living wage (over national minimum wage). This change has led Turner’s Pies to proudly become accredited by the National Living Wage Foundation.

"Our staff are important to us," Phil continued. "They are our very own Turner’s family. We want to know our staff are looked after, by us, so that is what we do."