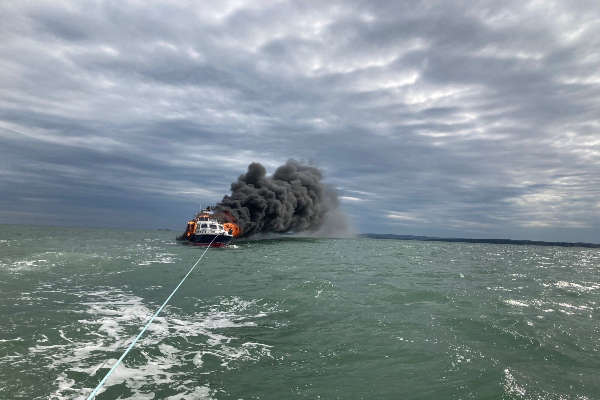 Two people have been rescued after their Chichester-based motor cruiser caught fire and sank outside Portsmouth Harbour in Hampshire.

The skipper of the 38ft craft issued a mayday call on Sunday June 19 after the blaze broke out.

The Gosport Lifeboat and the Bembridge RNLI Lifeboat were both scrambled to assist the cruiser.

A spokesman for the Gosport and Fareham Inshore Rescue Service (Gafirs) said its boat was on the scene within six minutes.

He said: “They found the people on board, in lifejackets, standing on the outer edges of the vessel as flames started to take hold inside.

“Two nearby yachts had also responded to the call and were standing by, but could not get close enough due to the sea state and plumes of smoke.

“Gosport Lifeboat quickly recovered both people to the safety of the lifeboat and then took the vessel under tow, away from the busy shipping channel and into shallower water.”

Duty coxswain Pete Byford said: “Thankfully we were on duty with the lifeboat today and out training, as it was only a matter of minutes from our arrival until the vessel was completely engulfed in flames.

“The crew on board the vessel had done everything they should: immediately calling for help, wearing their PPE equipment and being ready for the lifeboat to arrive.’

The two crew members were taken by the Bembridge RNLI Lifeboat to Chichester Harbour in West Sussex, where the vessel had been based.

The Gafirs spokesman said flares and gas cylinders on board the motor cruiser started to explode and, despite a duty fire tug being tasked to fight the blaze, the vessel was engulfed by the flames before it sank.

He added: “Gosport Lifeboat then assisted the tug in retrieving the fuel tanks, which had been carrying 1,800 litres of diesel, and other debris from the sunken vessel to minimise any environmental damage.”