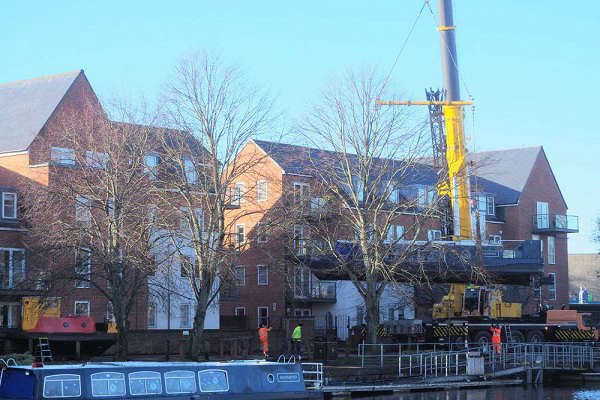 Volunteers at the self funded volunteer led charity behind the Chichester Ship Canal have been making sure everything is ship shape at the canal ahead of their 200th anniversary celebrations.

Volunteers at the self funded volunteer led charity behind the Chichester Ship Canal have been making sure everything is ship shape at the canal ahead of their 200th anniversary celebrations.

Every January one of the canal trip boats is removed from the water for inspection. This time, after two years. it was Kingfisher’s turn to be lifted out of the water - and it's the job of the Marine and Coastguard Agency (MCA) to make sure that everything is in order.

Ian Jackson, Volunteer Director, said: "It was not just Kingfisher that was removed from the water. This year saw an extra three boats lifted; Frisky, a 1950’s built tug was removed to repair her prop shaft; Cygnet, a fibre glass work boat required some much needed TLC and finally the canal’s newly acquired 1960’s built tug was moved to the water after having its hull restored and repainted by canal volunteers."

Preparation for the lifts started before Christmas and there was much activity on 4th January with the removal of the canal’s popular Christmas lights and decorations.

Lifts were performed the next day, and Kingfisher was lowered on to land-supported trestles and sleepers brought up from Hunston. Coussen’s Cranes from Hampshire helped with the lifting process, and deployed a 160-ton crane alongside an attendant lorry.

Ian continued, "The Trust ensured that there were two experienced volunteers on hand to make sure any question they had were answered.

"The boat lifts created a lot of interest and members of the public stopped to watch the work as it was happening. Many took photos. Because using a crane to move boats off and on to the basin is dangerous work, canal volunteers were on hand to make sure the spectators were safe."

The inspection usually takes a couple of days, and once remedial work has been completed, the Chichester Ship Canal Trust expects to have all the boats back on the basin by the end of January, within plenty of time for the start of the boat trips, anticipated to restart at the end of February.