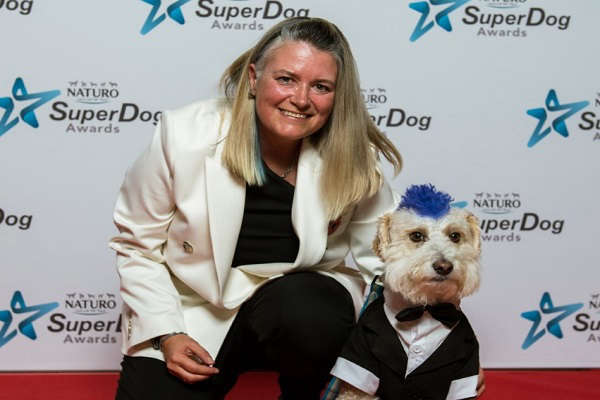 Scooter was thrown out onto the streets in Portugal when he was a puppy and was rescued by charity Dogs of Portugal. After being adopted in the UK, Scooter began training and working as a therapy dog. Scooter is a natural, and has been invited to care homes, hospitals, police stations and schools, where he is so loved! Scooter is currently training to be his owner’s full-time PTSD Assistant Dog and is touching the lives of thousands by making them smile.

Michelle Coy-Martin, Scooters owner commented: “He was chucked out onto the streets when he was a puppy in Portugal, and I brought him over here five years ago. I saved Scooter from being killed as he was going to be put down and then he saved me when I got diagnosed with PTSD.”

When asked about Scooters signature mohawk, she continued “A lot of people don’t like the mohawk but the mohawk is to make people smile and start conversations about rescue dogs and mental health.”

Others honoured include Mila Moo, who went from certain death five years ago to the Crufts carpet in both 2019 and 2020 and Henry the Hedgehog dog who works tirelessly with the British Hedgehog Preservation Society to sniff out hedgehogs and keep them safe.

TV presenter and media personality Stacey Dooley hosted the inaugural Naturo SuperDog Awards 2021 - a new annual awards ceremony, which celebrates and recognises the UK’s most exceptional dogs who help enrich our lives and the world we live in today.