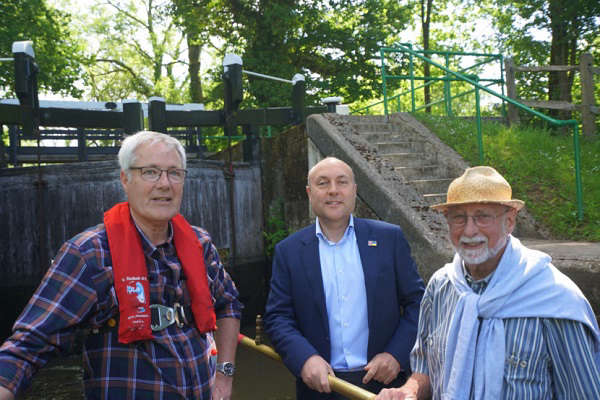 Arundel and South Downs MP Andrew Griffith met with the team behind the Wey & Arun Canal Trust to hear about their work to restore this historical canal route section by section wherever possible.

Andrew visited the newly built bridge in Harsfold, near Brinsbury, which has been completely rebuilt by Canal Trust volunteers to replace a causeway which was blocking the former route of the canal. Fully restored, the Wey and Arun Canal would rate among the most scenic in the country, befitting its historical status as a secure lifeline for trade and munitions between London with the south coast ports.

Andrew also met with Wey & Arun Canal Trust Chairman, Sally Schupke, Vice Chairman, Margaret Darvill, and Trustees, John Reynolds, Giles Eyre and Peter Winter, who explained the history behind The Wey and Arun Canal. In celebration of National Volunteers Week, Andrew extended his thanks to all the thousands of volunteers who have put such hard work into the reconstruction to date which has included 21 bridges, two aqueducts and 11 locks plus culverts rebuilt and miles of canal bed cleared.

“It is hugely impressive what the Wey & Arun Canal Trust have achieved so far in bringing this historical equivalent of a motorway back to life. In National Volunteer Week it is a reminder of the thousands of residents who volunteer their time in many different ways in order to benefit the community.

I’m a big fan of a country walk along a waterway and at a time when there is such a focus on mental health, it is terrific what the trust have done to open up some stunning walks.”

The Trust’s annual fundraising ‘Poddle walk’ will take place on the 12th June from Sidlesham. It is a fantastic 12-mile route which can be enjoyed by the whole family, and £10,000 was raised last year to go towards the restoration project.