Work to extend Bognor Museum due to start this spring 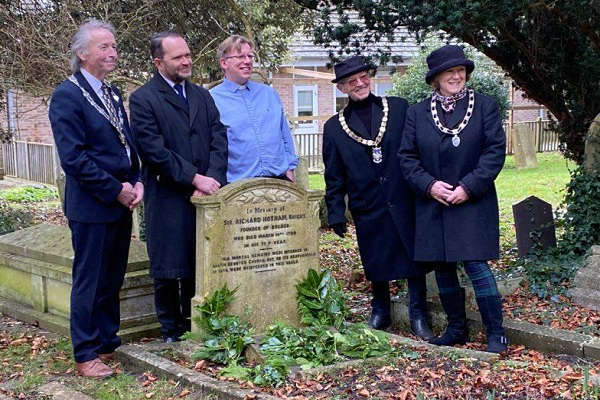 Civic dignitaries gathered at the grave of Sir Richard Hotham earlier this week, marking the date that Sir Richard laid the foundation stone of Bognor as a seaside resort 245 years ago.

Hosted by Bognor Regis Local History Society, the short service was led by Revd Tim Crook Vicar of South Bersted. He told those gathered that Sir Richard had lived in a house in Merton that had also been lived in by William Wilberforce, anti-slavery campaigner, commenting that slavery still existed albeit in a modern form.

Arun District Council Chairman Cllr Jim Brooks said it was still his hope that one day the town would erect a statue or similar to the founder, adding that more needs to be done to make residents proud to say they came from Bognor Regis.

Society Chairman Greg Burt said it was good to see several improvements to the seafront, which drew Sir Richard originally, started or in the pipeline, including the Place St Maur, Bandstand, Royal Hotel and Theatre remodelling.

Town Mayor Cllr Steve Goodheart added that further improvements were planned to the Fishermen’s Quarter, where you could once again buy fresh fish direct from the beach.

Greg Burt used the occasion to announce that a project to expand Bognor Regis Museum is set to come to fruition this spring, following a decision by the town’s Local History Society to give the scheme the go ahead after years of fund-raising.

Planning permission to convert a disused storage area to the rear of the West Street premises was gained some years ago, and since then the Society has been gradually amassing funds from events, donations, bequests, grants from Bognor Regis and West Sussex Councils, and also S106 monies from out-of-town retail developments. These funds will create a new exhibition area to house an original Bognor Bathing Machine and other beach-holiday related artefacts.

The cost of the work is £50,000 and the Society is appealing for a further £5,000 in donations to help meet the final fit out before it can open to visitors.

He explained that although West Street was the third site that the Museum has had since it was established in 1984, it was once again bursting at the seams. “The Bathing Machine is currently being stored by the Town Council who are anxious for it to find its eventual home. The plan is to move all seaside and holiday-related displays into the new space which we have dubbed ‘The Beach House’. This will in turn free up some space in the existing museum area to rearrange displays and perhaps create new ones. There will be some space in the new area to allow for a modest catering facility with tables and chairs in due course.

We are all very excited to at last start work on something we have been talking about for years and this will be the Society’s biggest project since moving the Museum into its current premises in 2011. It is also our way of contributing to the ongoing regeneration of the town by enhancing the town’s only indoor visitor attraction outside Butlins.”

Work is due to start in early February and in case works overrun, the decision has been taken not to announce a re-opening date for the 2022 season at the present time. If anyone would like to donate to the Museum’s fit out appeal e-mail bognormuseum@outlook.com or via the Museum’s Facebook page.