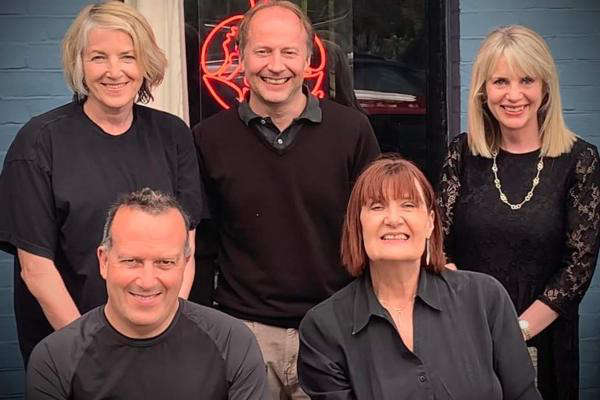 Worthing’s Hurly-burly Theatre Company is set to return to the stage post-pandemic.

They’re busy rehearsing a new show that will be presented at their regular venue, Worthing’s Ardington Hotel.

Playwright Gill Medway is the resident writer for the company and says she loves working with such a talented bunch of actors.

“They’re keen to tackle whatever I throw at them. We’ve been performing at the Ardington for more than six years. It all began in 2016 with our signature production, When the Hurly-burly’s Done, an unusual and comic take on Shakespeare’s three witches. And, of course, this rather neatly gave us the name for our company. Since then, we’ve been children from the 1950s, Cinderella’s Ugly Sisters, desperate lonely hearts, a hapless tour guide, Santa’s reindeer – and many more. We really enjoy surprising our audiences!”

A regular cameo on the Hurly-burly stage is Violet Brimley, played by Gill herself.

Speaking about the character, Gill said “She’s a northern lady who’s a great observer of human nature, and although she encounters some weird situations, she’s never judgmental and always the soul of diplomacy.

“In her latest adventure, Keeping it Clean, she’s intrigued by some dodgy goings-on behind the net curtains in an oh-so-spotless neighbourhood. Our audiences know her well, and she’s looking forward to seeing them again.”

Meanwhile in Three Across, there is Nathan, whose idea of a relaxing morning is tackling puzzles in his local coffee shop: “Safe enough, you may think. But that’s before scatty Joanna arrives and he finds himself drawn into a romantic entanglement.

“We have a great line-up this time,” says Gill. “In addition to our regulars, Liz Downes and Russ Bravo, we’re delighted to welcome Stuart Smithers.”