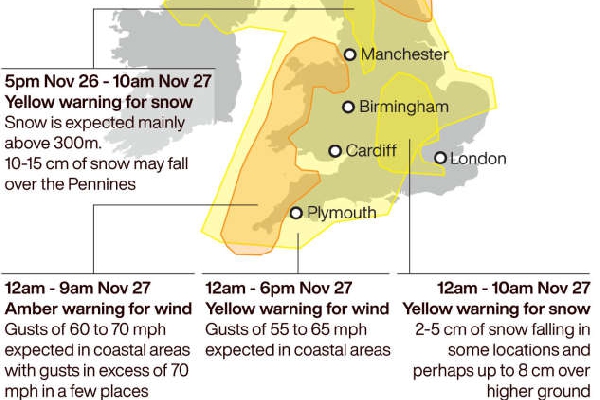 A yellow weather warning for strong winds and bad weather is in place across West Sussex tomorrow (Saturday 27 November).

It's across much of the country - with some winds expected to reach seventy five miles per hour.

The Met Office say disruption to travel should be expected - and to watch out for any debris on the roads that could be caused.

Meanwhile,  forecasters have warned people to avoid the coast as they put parts of Scotland and the north of England on maximum alert as Storm Arwen sweeps into the country.

The Met Office has issued the rare red warning for wind from 3pm on Friday to 2am on Saturday as the first winter storm is set to batter the country, with gusts forecast to be as high as 90mph.

The red warning stretches along the east coast from Middlesbrough to beyond Aberdeen. It is the first maximum alert to be issued since Storm Dennis in February 2020.

The warning, which is the highest the Met Office issues, means the impact is likely to be severe with the potential for damage to buildings and homes, with roofs blown off and power lines brought down.

“In addition to this one, I would emphasise the risk for coastal communities. We are talking about wave heights that really are exceptional. I’ve heard sort of nine-10 metre waves out to sea, which is you know, is particularly noteworthy,” said Mr Madge.

“We’re looking at the vulnerability of people like coastal anglers, for example, shore fishermen, people visiting in order to get photos, all of these communities need to take particular care and assess the risk.

“And obviously, don’t go if they feel that there’s any risk to themselves or others by them being there.

“People need to recognise really, that, you know, we don’t issue red warnings lightly, so therefore, when we do we feel that there is a much higher threat of risk.

“We urge people obviously to take action as a result of that and that action in this case is probably don’t go to the coast.

The alert also warns people in the zone of the potential of “roads, bridges, and railway lines closed, with delays and cancellations to bus, train, ferry services and flights”, and Rod Dennis, of RAC Breakdown, warned of the chance of major disruption and urged motorists to “avoid driving if at all possible”.

“Red warnings from the Met Office are relatively rare and are the strongest possible signal to drivers not to set out in the first place unless absolutely necessary,” he said.

Most of the UK is blanketed by weather warnings as the storm approaches, with those set to be in force on Saturday.

As the Storm Arwen approaches, Met Office forecasters have also moved part of the country from a yellow warning to an amber warning for wind.

“There has been an extension to the amber warning to include parts of west and south coastal Wales, and parts of the coastal southwest.

Both are now covered by amber warnings where they were yellow originally,” Mr Madge said.

“Also the fact that we have a warning for potential snow stretching across parts of central and southeast England. We’re not anticipating heavy snowfall in that area tomorrow, but there’s an increasing signal that there is potential for snow to occur in that area. Probably not settling but may present a driving hazard.”

Mr Dennis said: “Drivers in those parts of the UK covered by amber weather warnings should also consider postponing their planned trips until the storm passes.

“As well as making driving much more challenging, strong winds cause an increased risk of trees and powerlines falling. Add snow into the equation and the risks increase significantly.”

Temperatures are set to fall with the storm, too, and the Met Office has warned the north-east of England, north-west of England, Yorkshire, West Midlands and the East Midlands will experience cold weather from Friday to Monday.

Will Land, head of civil contingencies at the forecaster, said: “The UK will see temperatures drop to below average in the coming days, as cold air is drawn in from the north. This is coupled with the strong winds associated with Storm Arwen, which means it will feel especially cold in the wind.

“Areas in the north will see temperatures below freezing overnight, with daytime maximum temperatures only getting into the low single figures. It’s important to note that strong wind speeds, in excess of 65mph in exposed locations, will exacerbate the cold temperatures we’ll be seeing over the weekend.

The UK Health Security Agency has issued a cold weather alert, and Agostinho Sousa from the service urged people to keep an eye on older neighbours and relatives, saying: “Cold weather can have a serious impact on health, particularly for older people and those with heart and lung problems, as it increases the risks of heart attacks, strokes and chest infections.

“It’s really important to keep checking on older neighbours or relatives, especially those living alone or those who have serious illness.”