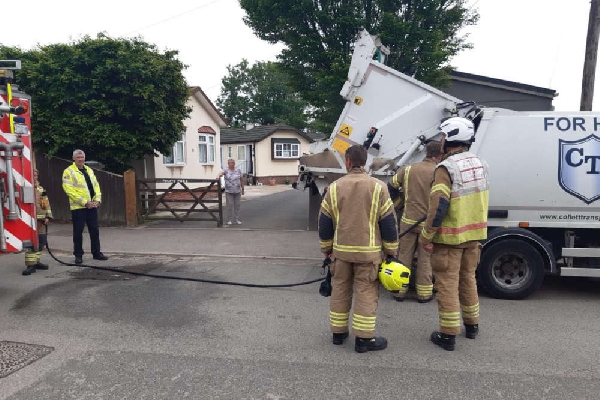 Firefighters in West Sussex are reminding people to take extra care with disposable BBQs this summer, after a fire involving a waste collection vehicle.

With warmer weather forecast West Sussex Fire & Rescue Service (WSFRS), Arun District Council and Biffa are reminding everyone planning on having a BBQ to make sure it is fully extinguished before safely disposing of their BBQ.

WSFRS was called to West Beach Car Park in Littlehampton shortly after 5.30pm on Sunday 6 June to reports of a fire in the rear of the vehicle operated by Biffa, which officers believe was started after a hot disposable BBQ was put in a bin and left to smoulder.

Joint Fire Control mobilised one fire engine from Littlehampton Fire Station to the scene, and firefighters used one hosereel to extinguish the fire. Fortunately it was spotted quickly enough for firefighters to bring the fire under control without significant damage caused to the vehicle.

The warning comes after a similar incident in Worthing earlier in the year, when a waste collection vehicle operated by Adur & Worthing Councils was completely destroyed by a fire that began when a hot disposable BBQ was left in a bin.

Jim McGrath is WSFRS’s lead on waste fires. He said: “It is really important that individuals consider the potential consequences and the impact that BBQs can have if they are not disposed of carefully and safely.

“We attend a number of fires where disposable BBQs and hot coals have entered the waste stream causing damage to both local and county waste infrastructure: from a park bin to a household waste facility.

“Whilst purchasing and preparing the food for your BBQ, please also take the time to really consider how you are going to safely ignite your BBQ, cook your food on it and then dispose once finished - allowing time for it to cool down completely. Only at the point where you are totally confident that your barbecue poses no fire risk it should then be disposed of as waste.”

Damien O’Neill, Senior Business Manager at Biffa, said: “Refuse vehicles are a vital part of local services and can cost £150,000 to replace. Fire damage to a truck can also impact our ability to collect your rubbish and recycling. I would urge everyone to take care when disposing of used barbecues and make sure they are fully cooled before putting them in the bin.”