Thunderstorms to hit parts of West Sussex amid scorching temperatures 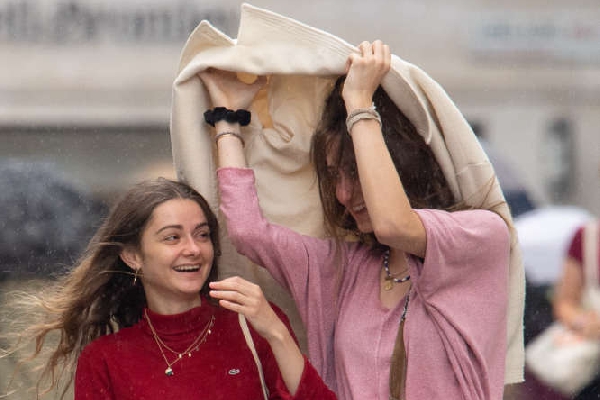 Thunderstorms are set to hit parts of West Sussex as the country continues to bask in sweltering temperatures.

A yellow warning for storms has been issued by the Met Office for parts West Sussex, including Petworth from 1pm until the end of the day.

The mercury could climb as high as 33C (91.4F) in parts of England over the next few days, which is hotter than top European holiday destinations such as Marbella, Mykonos and Tenerife.

The Met Office has also issued an amber extreme heat warning for parts of Wales, all of south-west England and parts of southern and central England, while Public Health England has extended its heat-health warning, which warns people to take measures to stay cool and look out for vulnerable people, until Friday.

Grahame Madge, spokesman for the Met Office, warned of heavy rain amid the thunderstorms.

He said: “The lightning frequency could be quite intense.

“We could see very large hail which could easily cause impact and obviously with any thunderstorms we could see those systems producing 30-60mm of rain within an hour or two.”

He added: “The thunderstorms we’ve got developing are purely because of the heat so they’re not likely to affect the heat in anyway.

“They will bring moisture and relief but it’s not an indication of things changing fundamentally.”

Mr Madge said: “Normally we say the south east but the focus of the heat is slightly shifted west this time.

“The heat is certainly likely to last up to the end of Thursday.

“From Friday onwards there is a strong signal for the heat that remains to be concentrated more towards the north and west whereas parts of England and Wales will start to come back to temperatures near normal.”

PHE and the Met Office are also keeping an eye on the rising temperatures in Northern Ireland.

Mr Madge said: “Certainly everywhere in England and Wales are above what would be average maximum temperatures.

“We’re just looking at the situation in Northern Ireland to see if there’s a need to issue a warning there as we could see temperatures there reaching the low 30s over the next couple days as the heat continues to build in the northern west.”

PHE has advised people to stay safe during the hot weather by keeping well hydrated, avoiding excess alcohol, wearing sun cream and trying to keep out of the sun between 11am and 3pm.