Bognor boss praises the Rocks for their Worthing win 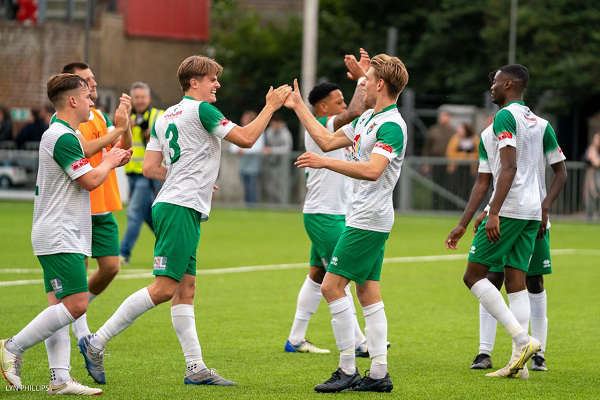 Robbie Blake wants his Bognor charges to replicate the desire they showed to secure a memorable win over local rivals Worthing in every game.

Coach Blake and manager Jack Pearce watched on as the Rocks battled tirelessly to grind out a 2-0 win at Woodside Road in an absorbing Isthmian premier division encounter in front of 2,101 supporters -- and chalk up the derby day bragging rights over the Rebels.

Goals from Ashton Leigh and Kayne Diedrick-Roberts after the break handed the visitors the spoils but it was the overall team effort against a powerful home side that impressed Blake. Rocks went into the Bank Holiday Monday showdown on the back of a disappointing 2-1 home defeat to Haringey Borough and on the back on two draws in their opening fixtures.

Now former Pompey coach Blake says he will look for a similar application from his players as the Rocks head into an FA Cup first qualifying round clash at Hayes & Yeading on Saturday.

He said: "We asked the players to think about how much this game meant to the supporters and to reflect some pride in their performance and they responded magnificently. To a man they worked their socks off and we were so pleased with the desire and intent they showed.

"Worthing are a fine side and of course they had plenty of chances but we defended with purpose and in resolute fashion and this gave us a platform. We knew we would have chances and when they came we took them. But even at 2-0 Worthing pressed and tried to claw their way back in to the game and that was when we had to dig deep and be resilient.

"The lads gave everything and they got their reward with the win. We're so pleased for the fans and everyone at the club to be able to bring them the victory we all wanted. our fans have been unbelievable and travelled in great numbers and the vocal support was off the scale.

"Next up we go to Hayes & Yeading in the cup and they will prove a tough nut to crack having enjoyed a great start to their season. Let's go there with the same levels of desire and with a similar work rate and we will see if we can get the win and enjoy a good cup run."