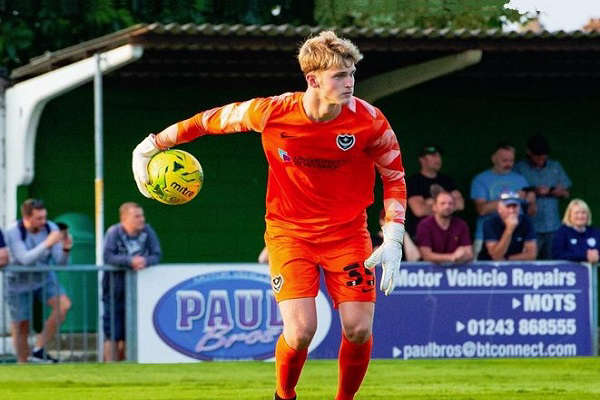 Rocks fans can be forgiven a double-take as they cast an eye to the away side's keeper when Robbie Blake's men take to the pitch at Horndean on Saturday for their latest pre-season friendly.

That's because young Pompey keeper Toby Steward will be between the sticks for Bognor after Blues boss Danny Cowley stepped in to help the Nye Camp aces by loaning them the player.

Rocks keeper Taylor Seymour has picked up an ankle injury and Fratton Park chief Cowley was only too happy to help by allowing Blake to borrow the custodian who played against his men in the friendly on Wednesday.

Steward impressed in the 1-1 draw before being replaced by Joshua Oluwayemi in the second half. And Blake has been quick to thank Cowley and Pompey. He said: "It's a great gesture from Danny and Pompey and we thank them for helping us out for this game."

Meanwhile, Blake says he will know more on how his squad will continue to take shape after the game at Five Heads Park against Micky Birmingham's outfit.

He added: "We will continue to monitor performances and I'm pretty sure that we can get a clearer picture of where we are once we have faced Horndean.

"Micky always has his players prepared really well and we know there is a stiff test awaiting us and that's why it's great preparation for us. We've done well to get wins over Littlehampton Town and Gosport in pre-season so far and to earn a draw against Pompey XI was brilliant, too, in a game where we more than held our own.”

One player Blake is keen to get over the line is striker Nick Dembele. The former Gosport attacker grabbed a goal in the draw with Pompey midweek and it is hoped that a deal can be reached sooner rather than later.