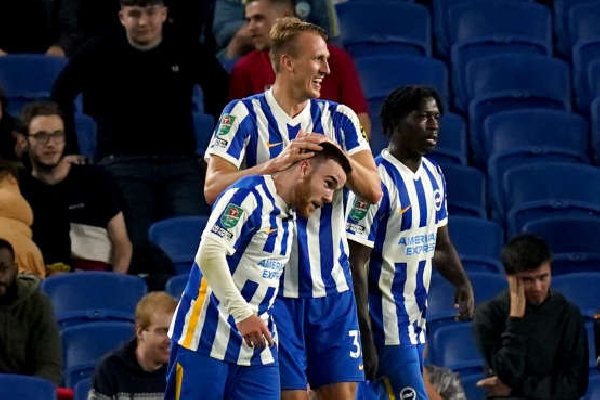 Brighton manager Graham Potter stated everyone at the club loves Aaron Connolly after his two goals were the difference in a 2-0 Carabao Cup win over Swansea.

The Republic of Ireland international had only one goal to his name in the calendar year before his 33rd-minute deflected strike broke the deadlock at the Amex.

Connolly’s second then followed five minutes later in almost identical fashion as he placed the ball in the far corner beyond Swansea goalkeeper Steven Benda.

Brighton kept their impressive run of form going into the cup despite boss Graham Potter naming an entirely different starting XI from his side’s hard-fought 2-1 win over Leicester at the weekend.

He said: “(I’m) delighted to go through, I think it was a tough game, two teams going at it. I thought Swansea contributed really well, they were fantastic as well.

“Really pleased with our players, I thought the attitude was great, commitment to the game, showed good respect to the opponents and worked really hard.

“Obviously Aaron’s finishes are the difference.

“I thought he took the goals really well and it’s great for him in terms of his confidence because it doesn’t matter what you say, it’s nice for the guys to score and he did so really happy with him, I thought he worked for the team as well so a really good night.”

It was the Ireland international’s first goal of the season on only his second club appearance but Potter believes there is more to come from the 21-year-old.

He added: “Aaron’s a good kid, he’s a really nice kid, there’s no problem with him at all. He’s just sometimes young and wants to play and he can get frustrated, he’s a human being that’s the truth.

“Everyone loves him here, we want to help him, help him reach his full capacity.

“He’s only young and he’s going to make mistakes and it’s not going to be a straight road for him but the quality is there.

“I think that side helps him in terms of his finishing but he contributes for the team defensively, he works for the team, his reactions were really good so he gets his reward and I’m delighted for him.”

Swansea hit the woodwork twice in the second half but were unable to force a comeback, unlike their 3-3 draw against Luton at the weekend when they were three goals behind.

Manager Russell Martin said: “So pleased with so much of it but we should score.

“We should score early on, we had two or three good chances with an aggressive press we worked on but we didn’t and then conceded two goals we shouldn’t have done.

“Then a bit too much fear kicked in. We gave Brighton too much control. We chose easy decisions instead of taking the brave ones.

“We then asked them to show more courage and we had some brilliant chances. We had five good chances and that’s my frustration for the players, they deserved to score.”