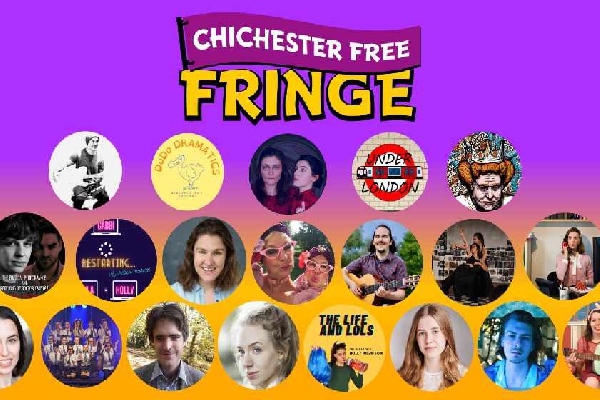 The 3-day online event will be broadcast live from the Vicars’ Hall at Chichester Cathedral on 16, 17 and 18 June.

Audiences will be able to watch all the shows for free, live-streamed through the Chichester Fringe website.

During the streaming audiences will be able to interact live with the show through social media and donate buttons, which help support the performers to continue making their art!

A host of performers take to the stage, to be part of Chichester’s first-ever free fringe. The full schedule can be found on the website.

On Wednesday there will be performances from Comedy musical duo Russan and Royd, spoken work from Chichester’s Open Mic Poetry, music from local artist J David and new one-act play Under London, as well as screened content including comedy sketches and poetry.

The Fringe will also have an exclusive snippet of Original Case Theatre’s new show: The Tragical Performance and Retelling of Doctor Faustus and to close the evening’s programme we have a new comedy play Good Girl.

Friday concludes the Fringe with a comedy night. Kicking off with a selection of screened content including comedy from Quirks & Foibles sketch trio and a short film Occupied created by Olivia and Fred Coppin.

Restarting, a new jukebox musical from Parts Theatre Company will debut at 19:30, zero-waste puppetry company Dodo Dramatics bring their Mock the Greek and finally at 21:00, we have our comedy show, including Stand Up from Zara Cassidy and Amelia Stephenson, the NaNa Characters will take to the stage and Tik Tok creator Holly Hoskison brings us her 15-minute comedy The Life and Lols.