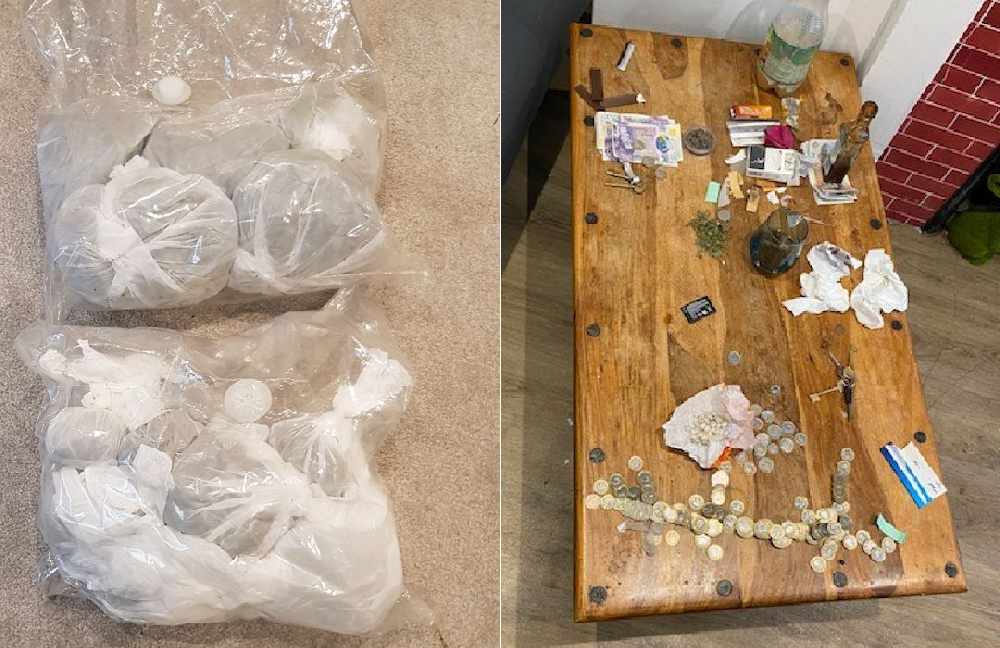 Police across Sussex have been keeping up pressure on 'County Lines' and other drug dealers.

During 2020 Sussex Police recorded 236 disruptions against such 'lines' into the county, mainly from London, an increase of 171% in disruptions over the previous year.

And in May this work was intensified as part of a continuing national effort.

Detective Chief Inspector Will Rolls said; "County Line drug dealing continues to be a threat with currently 36 county lines active across Sussex. The force's primary concern remains the exploitation and trafficking of vulnerable adults and children.

The week of intensified activity focused on disrupting the activities of those involved in County Lines by safeguarding and protecting vulnerable people, pursuing offenders, reducing the number of lines, and seizing proceeds of crime.

Activity during the week of 17-22 May took place across the force area:

- Proactive targeting of drug related activity, resulting in 27 arrests, seizure of drugs with an estimated street value of at least £66,000, £10,000 cash, 16 mobile phones and four weapons including a machete and a knuckleduster;

- Educational visits to 69 hotels and B&B's and taxi firms to talk about the risks of exploitation.

In Brighton and Hove there were 18 arrests linked to enforcement activities throughout the week, that included working with BTP at Brighton Railway Station deploying the electronic knife detection arch, local officers working with the force's Specialist Enforcement Unit use of automatic number plate recognition, and surveillance of suspects in the city.

Proactive stop checks resulted in the arrest of a suspect for possessing drugs with intent to supply,

Ten arrests were made for Class A drugs supply offences, three for grievous bodily harm, one for possession of offensive weapon, and five others for vehicle-related offences.

(See Main photo of drugs seized when three men were arrested at an address in Montepelier Road, Hove).

In addition, officers and staff were active in prevention, protection and safeguarding. 57 educational visits were made to hotels where officers engaged with managers and staff and provided them with literature to help them spot the signs of child exploitation.

Four visits were made to taxi firms, and partnership work with city taxi enforcement officers and some 50 drivers were spoken to at ranks and provided with CrimeStoppers reporting cards and a child exploitation ‘A Taxi Drivers View’ leaflet.

15 visits were made to letting agents where officers spoke with management and staff and provided them with posters about spotting the signs of exploitation and identifying 'cuckooing’.

Secondary schools were visited by police Youth Intervention officers who engaged with over 280 children around the dangers of exploitation, showed educational videos to pupils about the risks of knife crime.

The Sussex Police community engagement van was also deployed at key locations in the city where attempted recruitment of young County Lines 'runners' has been suspected in the past.

Local officers were joined by the force's recruitment team and they positively engaged with many young people and other members of the public highlighting the dangers of County Lines and criminal exploitation whilst also encouraging them to consider policing as a career!

Sergeant James Ward said; "Our work in just one week produced some fantastic results with Departments pulling together to enable signiifcant arrests and safeguarding, and considerable disruption to County Line activity in the city."

In East Sussex, Hastings Neighbourhood officers working with the force's Specialist Enforcement Unit (SEU), and using various surveillance tactics, observed a drug deal take place on a street in St Leonards. SEU officers moved in to effect an arrest and the suspect was seen to enter a house nearby. Officers effected an immediate dynamic entry to locate and arrest the man before items could be lost.

Upon gaining entry to the house, two suspects were found in a bedroom where a quantity of cash and mobile phones were evident on the bed nearby. Both were arrested while a search revealed 17 wraps of crack and heroin on the bed.

The two arrested were a 40-year-old man and a 16-year-old girl, both from London, who had recently been arrested having been found in similar circumstances in Kent.

While at custody a further search of the girl revealed another quantity of cash and up to 200 plus wraps of crack and heroin.

Both were interviewed and released on police bail while the investigation continues. The girl was later returned to London by the police for her own safety and welfare.

In West Sussex, officers from the Community Investigation Team (CIT) executed early morning warrants with the assistance of the Metropolitan Police at addresses in Mitcham, South London. £10,000 in cash was seized along with £1000-worth of crack cocaine. Mobile phones and laptops were also seized along with drugs paraphernalia.

Two women and two men were arrested on suspicion of supplying Class A drugs, and modern slavery offences and were interviewed in Sussex before being released on police bail while enquiries continue. A 5th suspect. a man, has since been arrested in Worthing and is being interviewed.

CIT officers also executed a warrant at an address in Durrington where a boy and a man were arrested on suspicion of being concerned in the supply of Class A drugs, and were interviewed before being released under investigation, which now inclices potential modern slavery and child exploitation offences. £200 Cash, about £500-worth of drugs, several mobiles and laptops along with drugs paraphenalia were seized. A large machete found concealed on one of the suspects was also seized

During the past year co-ordinated police activity has stepped up even further, with a new Surrey and Sussex Police intelligence team known as Operation Centurion, which works with London's Metropolitan Police to better target and prosecute offenders of county lines activity between the capital, Surrey and Sussex. In the six months since the team’s inception, they have contributed to more than 50 lines being disrupted, and to charges of over 60 individuals across both counties.
The work of Centurion's specialist teams includes analysis from mobile phones used by dealers to buy and sell class-A drugs. This information is critical to investigators, helping them target the most significant members of organised crime groups and ensuring longer term disruption.

Will Rolls said; "Even during the recent lockdowns we continued every day to disrupt dealers who try to deal dangerous drugs across our communities and we target those who use children to sell drugs or those who buy drugs from children. We investigate and prosecute, working relentlessly and targeting those who would bring harm to local people, including often the most vulnerable.

As lockdown restrictions lifted, police have started to see those involved in this criminality trying to return to their normal methods of operation. The streets are busier, their criminality is less obvious.

Will Rolls adds; "Local crime is often a direct result of major drug distribution via county lines and by working together with partners to shed a light on this often hidden crime. We are sending a clear message to drug dealers that they cannot expect to go undetected in Sussex."

The County Lines response isn’t just a policing one. Effective collaboration between law enforcement and safeguarding organisations and also the private sector industries is a vital part of both the national and local response.

Will Rolls said; "We also work closely with other agencies to support those vulnerable adults and children who are exploited by county line gangs. This includes regular visits to those adults at risk of cuckooing and raising awareness with those agencies engaged with children to ensure that information is shared effectively to prevent young people being drawn in to this criminality."

Members of the public can also help, the best advice is to trust your instincts – if somebody shows signs of mistreatment, or a child seems to be travelling long distances or is unfamiliar with a locality, you can report suspicions to local police on 101 or to https://www.sussex.police.uk/contact/af/contact-us/us/contact-us/provide-more-information-to-be-added-to-a-crime-report/ - or to British Transport Police (link to be added) if you see something on the railway network.

There are also many sources of further advice and assistance to help combat the harm caused by drugs.

Safe Space Sussex at https://www.safespacesussex.org.uk/search?query=drugs takes you to all the local organisations who provide support for those affected by drugs misuse.

The Samaritans - Offer emotional support 24 hours a day. Their helpline number is 08457 90 90 90 and see their website www.samaritans.org

Families Anonymous - Support groups for the family and friends of people with a current, suspected or former drug problem. Their helpline number is 0845 1200 660 and see their website - www.famanon.org.uk

Adfam - A national organisation working with and for families affected by drugs and alcohol. Contact them at admin@adfam.org.uk or see their website www.adfam.org.uk