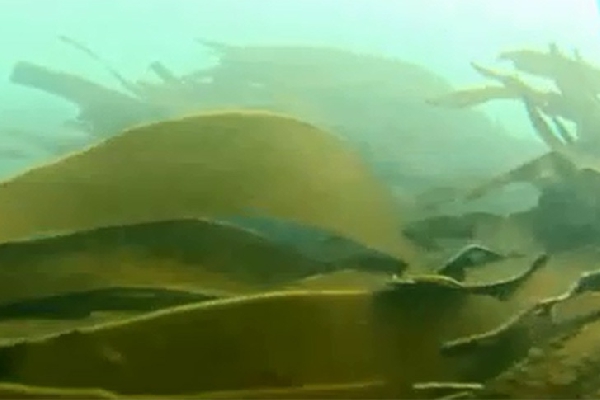 Adur & Worthing Councils are set to become the first local authorities in the UK to lease the seabed off their coast from the Queen in a pioneering project to invest in climate change measures and restore marine habitat.

The historic move could pave the way from an ambitious plan to create a Sussex Bay Marine Park along the entire county coast, east and west, to protect vital marine life, restore estuary habitat and even create a destination for eco tourism.

Backers of the scheme see it as the 'blue mirror' to the South Downs, with all the environmental protection, tourism and potential job opportunities that could be created.

The Crown Estate, which manages the land on behalf of the Queen, owns the coastal seabed off the shores of the UK to a distance of 12 nautical miles.

The Crown is now in talks with the Councils to enter into a 'natural capital seabed lease' which would allow the authorities and their partners to create a 'kelp blue carbon investment product'.

Government bodies such as the Environment Agency, water companies and other companies can invest in kelp forests to help in their own bids to become carbon neutral.

The Nearshore Trawling Byelaw introduced by Sussex Inshore Fisheries and Conservation Authority (Sussex IFCA) was earlier this year approved by the government after effective lobbying by the Help Our Kelp partnership led by the Sussex Wildlife Trust.

It means that more than 300 square kilometres of seabed off the Sussex coast will now be protected from trawling - a measure which should allow essential habitats, such as kelp forests, to regenerate.

Coastal kelp beds also help combat climate change by removing carbon dioxide from the atmosphere, reduce coastal erosion by absorbing wave energy and provide a haven for wildlife. If fully restored a kelp forest off the Sussex Coast could capture the carbon emissions equivalent to 66 million miles driven in a family diesel or the carbon emissions of 7,235 homes.

Once established, the ecosystem is expected to support sustainable inshore fishing with species such as bass, sole, black seabream, lobsters and cuttlefish, thriving in the conditions.

Now Adur & Worthing Councils want to move a step further by creating a Sussex Bay Trust to attract investment in growing the kelp forest and restoring marine habitats. While the initial lease from the Crown would likely cover the seabed off Adur and Worthing there is potential for it to eventually cover the entire Sussex coastline.

“This is a potential game-changing project which would help us cut carbon emissions, restore beautiful marine and estuarine habitats and perhaps even to create Sussex Bay as a destination for a whole host of sustainable marine activities.

“I am proud that this Council is part of this project to become the first in the UK to lease the seabed from the Crown for this important environmental project. It shows that we have sustainability at the heart of everything we do.”

“We have a bold vision and that is to see the waters off our coast and our estuaries teeming with marine life again, growing kelp that will capture tonnes of climate-warming carbon and signal that this area is serious about wanting to restore natural beauty while helping the environment.”