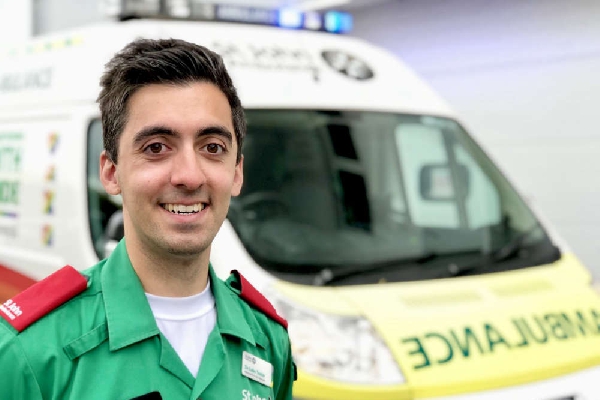 Usually, when Dr Luke Tester has a couple of days free from the shifts and stresses of A&E at the Royal Sussex County Hospital you will find him out and about with friends or, more recently, finishing his Post Graduation Certificate in Medical Education.

Last week, two days off  were spent a little differently as he swapped a hospital in Brighton and caring for the sick and ill of Sussex, for an airport in Birmingham, welcoming desperate and frightened refugees as they arrived in the Midlands having fled their homes in Afghanistan.

And as volunteer for St John Ambulance he was able to do something to help the people he saw crying for mercy on the television news.

Luke said: “I had seen the news, the awful, horrendous scenes, so when the call went out across the country for help in welcoming and caring for the refugees when they arrived in England, I immediately knew I wanted to help.”

With his friend, Brighton medical student Chris Holmes, Luke drove up on Tuesday morning, and joined a team of other St John volunteers. Luke and Chris helped at the airport all evening, slept in a Travelodge, helped all day Wednesday and then drove back to Sussex.

One time working in Brighton, Luke had cared for some refugees, scared and frightened, who had been brought in to A&E after being found in a container at Newhaven port.

But nothing prepared him for what greeted him at Birmingham International Airport.

“There were hundreds and hundreds of people, many arriving dehydrated and malnourished, as well as exhausted, after days waiting outside the airport in Kabul, where they had been exposed to the elements while they tried to secure their passage to safety,” said Luke, who has been with University Hospitals Sussex NHS Foundation Trust for four years, and currently works out of A&E at the Royal Sussex County.

“I wanted to help, provide a safe and secure welcome, care for people where it was needed. I’d never seen anything like it. It’s the young, the old, the infirm that have it the worst.”

Luke added: “I treated a three-month-old baby girl. She had arrived in a bad way, dehydrated and needed hospital treatment. She’d had a terrible experience. My colleagues took her and her mother to a Birmingham hospital and then Chris and I were able to bring them back to the airport once she had been seen and had recovered.

“I was able to reunite them with the baby’s father and other siblings. It was emotional to see that and wonderful for them. They arrived here without a thing as all their possessions had been stolen in the chaos and disorder in Kabul. At least at the end of this awful time they were together and safe.”