New leases awarded to cafes in Littlehampton and Bognor Regis 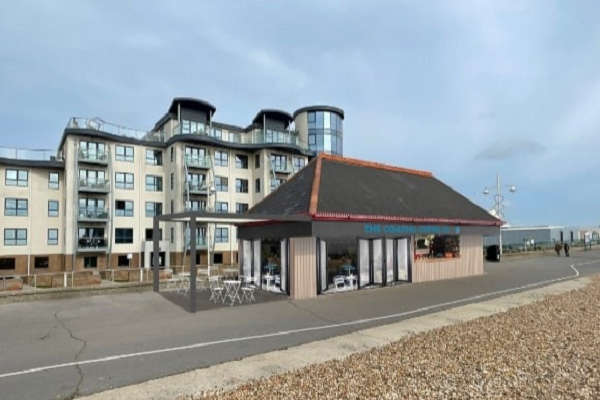 The process was very competitive and plenty of interest was shown in these opportunities. Following the assessment process, the Council are pleased to announce that new leases have been awarded for all four cafés.

Chace Catering Ltd for Mewsbrook Park Café including the operations of the Boating Lake. David Chace, proprietor, plans to construct a new café within the footprint of the existing building and public toilets. The new café will provide public toilets on the same terms as the current facilities. A full planning application will be submitted in due course. David said:

“We have operated the existing café in Mewsbrook Park for the last 11 years and are delighted to have been awarded a new twenty-year lease. With this new business proposal, we will construct a bigger and better café, to seat up to 44 people indoors. The new café will include public toilets as required by the council. We hope to start work in October 22 with the new café opening in time for Spring 2023.’

“We are delighted to have been awarded the lease at Norfolk Gardens so we can continue serving great coffee and food on the seafront at Littlehampton.

“Having opened during the pandemic, Edge by the Sea has become Littlehampton’s ‘go to’ place for speciality coffee and snacks. We look forward to developing the potential of this iconic seaside building in the coming years!”

Ann Hancock, proprietor of Oasis for West Park Café Bognor Regis, intends to refurbish the existing building including the creation of a roof terrace area. Public toilets will continue to be available. Ann said:

“I would like to thank all my committed customers for all their magnificent support throughout the pandemic and continuously thereafter. I would like to make West Park Café (Oasis) a destination for all to use within the community and visitors alike. It has been a difficult and uncertain couple of years for us all, but I’m delighted that my proposals have been accepted by the council. The café will be undergoing a full refurbishment soon, so watch this space!”

Coastal Coffee Company are the successful bidders for the kiosk on Bognor Regis Promenade, at the junction with Gloucester Road. Jamie Hawkins, Proprietor, intends to create a water sports themed café and will include the boat ramp. Proprietor, Jamie Hawkins said:

“Coastal Coffee / The Beach Littlehampton is very pleased and excited to bring it’s unique mix of great coffee, fresh food and coastal spirit to the east end of Bognor Regis sea front. We plan to open the kiosk and manage the Bognor slipway early this summer and integrate the other watersports activities during the summer, while we develop plans with Arun District Council. We hope to expand the site, catering for clients inside and out, as well as bring the likes of Stand Up Paddling, kite sailing, wing foiling and other watersports to the area.”

“I am delighted that the council has awarded these four café leases across the Arun District. Three of which are awarded to existing lease holders who provided imaginative and exciting proposals which enhance each of their existing offers but also adds value to each of the parks in which they are located. We also welcome Coastal Coffee to Bognor Regis Promenade. They too have proposed exciting plans which we believe the public will love.”

Formal planning applications will soon follow and therefore the opportunity for the public to comment on the proposals.