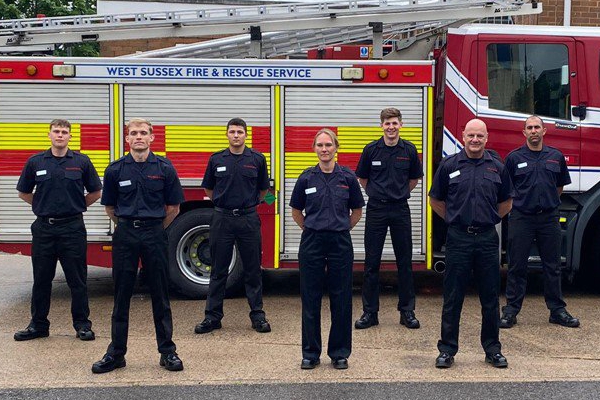 Retained firefighters live or work within close proximity to one of WSFRS’s fire stations and often have full time employment elsewhere in their communities. They either respond to emergency calls from home or their main employment.

After completing their initial training, the seven new recruits, who will be based at fire stations around the county, took part in their pass-out parade today (Friday) at Horley Fire Station. They were welcomed to the service by Area Manager for Response, Steve Ash.

He said: “Becoming a retained firefighter is a real commitment, but one which is a fantastic way of giving back to your community. Being on-call to help your neighbours in their hour of need takes dedication and determination, which are qualities that all of our eight new retained firefighters have demonstrated to make it to their pass-out parade.

“I know they have been put through their paces over the course of the last two weeks by our training team to ensure they are ready to respond to an emergency incident, and I would like to wish them all the very best of luck with their careers with our service."

Following their intensive two week initial training course, the new recruits will complete a number of additional training courses over the course of the next two years before they become competent firefighters. Training courses include road traffic collisions, hazmat (dangerous substance), fire safety and breathing apparatus, as well as on-station learning for the completion of a development programme.

The new firefighters, and were they will be based, are: