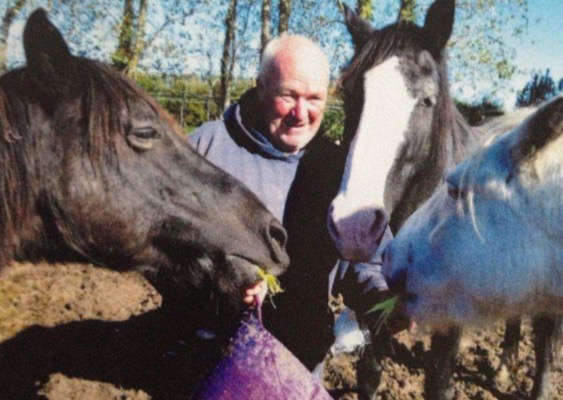 A Pagham organisation which rehabilitates and cares for ponies and horses faces continued uncertainty after planning permission was given for homes at its base.

Pagham Ponies cares for animals at its stables at Church Barton House, Horns Lane but outline permission for up to 65 homes to be built at the site was granted in 2019 and a recent masterplan and designs have been submitted to show what the development will look like. It is part of the Pagham South ‘strategic’ area which has been allocated for development by the council and which will see an additional 400 homes built next door at land south of Summer Lane and west of Pagham Road.

Nigel Mundy, who runs Pagham Ponies, says he has rented the land for 17 years. “I was given notice to quit so I went through the rigmarole of trying to find a place for the horses, which is basically impossible,” he said. Mr Mundy has described how various arrangements fell through which threatens the future of Pagham Ponies. “I’ve got nowhere else to go,” he said, “If I’ve got to get rid of the horses some of them are going to have to be put to sleep because they’ve got issues which mean they can’t go to a new owner. “It’s a horrible situation to be in.”

He describes how his work started and how he has ‘gathered’ animals in need. “My son’s girlfriend had a horse and she was teaching him how to ride,” said Mr Mundy. “So I went over to this stable and spoke to the lady in charge about riding lessons so I could go out riding with my son.”
Nigel was told there wasn’t a horse of a suitable size for him to ride and he moved on but he described an event which changed that after he had moved to Pagham. “My son rang and asked me if I still wanted a big horse,” he said. “Bear in mind I didn’t actually want a big horse, I just wanted to ride one. “So I asked about the horse went into the wash box and the lighting wasn’t very good so all I could see was a big shadow with a red rug wrapped all the way around its body and its head nearly on the floor. I knew a little bit about horses but not a massive amount so asked if I could take the rug off.” Nigel was warned he ‘wouldn’t like what he saw’ when he removed the rug and described how he ‘burst into tears’ after seeing how emaciated the animal was. “You could see every rib,” he said, “and her neck was so thin she couldn’t hold her head up properly.” The horse had been ‘found in a field’ according to its then owner, with little access to food. Nigel was told that it could be put up for adoption or rehabilitated at a riding school. “As I was standing there talking, ” Nigel said, “She lifted her head, with great effort, and looked me in the eye.
“Unfortunately I fell in love with her and anyone who meets her will know why. “The following morning I phoned the RSPCA and adopted her there and then.”

Over the following months, Nigel rehabilitated the horse, which he named ‘Ebony’ and said her physical transformation shocked even the RSPCA inspector who came to follow up with him.The horse’s rain scald (a bacterial infection) which was turning her coat dark brown, had gone and revealed a jet black underneath. “I realised there were more out there that needed help,” said Nigel. He sought out a companion for Ebony and the rest is history. He cares for horses, ponies, and even a turkey, under the banner of Pagham Ponies with the help of volunteers. They are known for visiting care homes, hospices, and events to raise awareness and act as therapy animals in some cases. “This is now at risk,” says Nigel, “They’re called the Pagham Ponies because they live in Pagham.”

Nigel hopes to remain on the land as long as possible and says it would not be possible to place the horses with another sanctuary.
Plans to build on the land are still progressing and the developer is currently seeking permission for its latest designs.
A decision on this part of the application is expected in July.