4 shouts in 36 hours for Littlehampton RNLI lifeboats and crews 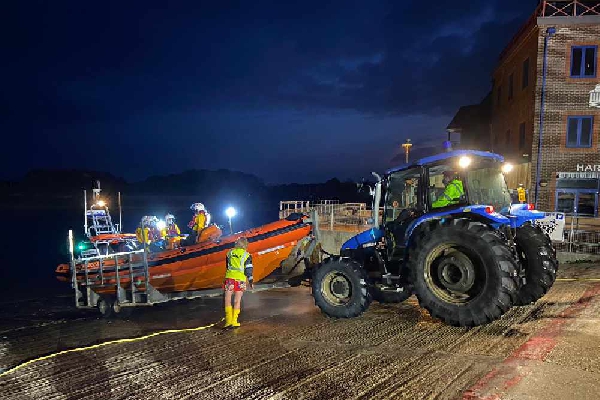 Friday 11 June was clear with a light southerly breeze when reports were received of an adult drifting out to sea near Littlehampton harbour’s entrance.

The lifeboat station’s D-Class inshore lifeboat Ray of Hope was launched and, following earlier assistance from the RNLI Lifeguard team on East Beach, a man struggling from being in the cold water, whilst also suffering from cuts and abrasions, was recovered and taken to the slipway of the boathouse at Fisherman’s Quay.

Emergency services were on hand to provide further assistance. Later that evening the B-Class inshore lifeboat Renee Sherman was launched to a possible person in the water near Bognor pier, but the crew were stood down once it was confirmed that the casualty was onshore.

Saturday 12 June crews were paged at 9.02pm to assist a drifting 32ft motor vessel that had hit Bognor Rocks resulting in a complete loss of propulsion and steering.

Four crew aboard the Renee Sherman were quickly on the scene and able to take the damaged vessel and three persons onboard under tow to Littlehampton.

Whilst underway, the crew were alerted to reports of a missing person in the water in the Selsey/Pagham area where a search was already underway, by RNLI vessels from Selsey, for a kayaker who had not returned to shore. After securing the recovered motor vessel onto visitor moorings in Littlehampton harbour Renee Sherman was refuelled and immediately re-tasked to assist in the ongoing search near Selsey.

The search operation was escalated with the addition of RNLI crews from Shoreham, Bembridge and Hayling Island together with two HM Coastguard fixed wing aircraft and a helicopter. Littlehampton, Hayling and Hillhead Coastguard Rescue Teams assisted onshore alongside Sussex Police.

Undertaking an extensive search through the night the Littlehampton RNLI crew were eventually stood down at dawn from the ongoing operation, returning to the boathouse at 4.26am Sunday 13 June more than seven hours after they launched the previous evening. Sadly, news was received later in the morning that a body had been recovered by a fishing vessel approximately 1.5 miles south of Selsey Bill and was believed to be that of the missing kayaker.

Mike McCartain, Deputy Launch Authority at Littlehampton lifeboat station for all four of the incidents, said: “The crews gave everything they could to help others over the last 36 hours.

"Individuals and vessels were assisted and brought safely to shore, but tragically despite the extensive search and rescue efforts of RNLI volunteers from Littlehampton, Shoreham, Selsey, Bembridge and Hayling together with HM Coastguard and Rescue Teams, Sussex Police confirmed a loss of life Sunday morning 13 June. The whole RNLI community extends their thoughts and profound sadness at this tragedy to the man’s family and friends.”