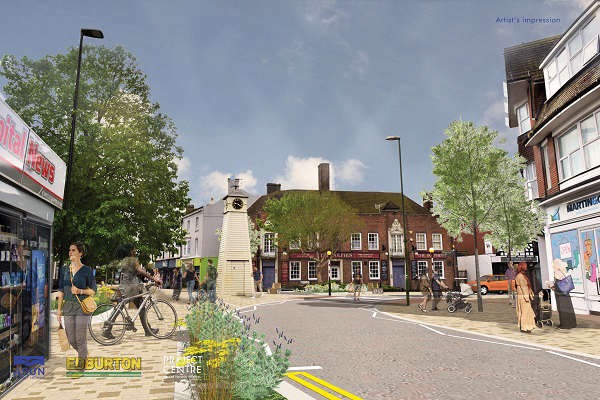 The cost of improvement work in Littlehampton town centre has risen again.

Officers at Arun District Council say unmapped services, including a surprise brick sewer, and rising construction costs have contributed to the overspend despite a search with a ‘ground penetrating radar’ and materials being ordered months in advance.

The original project budget was around £3.4 million but it is now expected to reach £5.3 million.

Members of the council’s Economy Committee approved a further £400,000 for the project at a meeting on Tuesday (26 July).

The council’s director of growth, Karl Roberts, said: “I think hopefully everybody will agree it’s making quite a significant difference to the appearance of the town and that’s really, really positive.

“Budget wise we’ve tried to run it in a fairly lean sort of way with relatively limited sums for contingency matters and other issues such as inflation.

“As we all know, from our own personal experiences, the world from an economic point of view is in a very different place than perhaps where it was 12 months ago. That creates its own challenges when we are delivering projects.”

The newly approved funding includes £250,000 for overspends and £150,000 as a contingency. Mr Roberts said future additional spending was ‘not anticipated’. The major project is being brought forward in five phases with phases two and three currently under way along the High Street, Beach Road, East Street, and Clifton Road.

Since the project was approved, the council also agreed to stump up £240,000 for fibre broadband works that otherwise wouldn’t have been included. Improvements from the rail station to the High Street (known as phase 1) were originally excluded from the project due to costs, but these have since been funded to the tune of £1.2 million by West Sussex County Council.

It’s hoped the project – which includes new paving, planting, and street furniture – will regenerate the town centre and bring hundreds of new jobs.
Councillors were pleased to see the progress but some noted that certain parts of the town are already ‘looking pretty mucky’.

Economy Committee chair Andy Cooper (Con, Angmering and Findon) said it had ‘given the whole town a lift’ but ‘wouldn’t look pristine forever’.
Mike Northeast (Lab, Courtwick with Toddington) said the dry weather meant there was no rain to wash dirt away from the lightly coloured paving.

He was reassured by Mr Roberts that pavements will be deep cleaned and ‘sealed’ – works that are included as part of the extra funding.

“It’s a shame that actually people aren’t perhaps a little bit more careful about where they drop food and other items,” said Mr Roberts.

Opposition leader James Walsh (LDem, Beach) wanted to know that graffiti would be dealt with ‘swiftly’ and that trees would be cared for in hot weather.